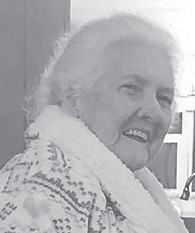 Funeral services for Nannie Sue Stewart, 80, of Mayking, will take place at 1 p.m. today (Wednesday) at Millstone Missionary Baptist Church. Burial will follow in the Stewart family cemetery at Mayking.

A daughter of the late Alvin and Alta Craft Spangler, Mrs. Stewart was the widow of Dudley “Duke” Stewart. She died February 16 at Whitesburg Appalachian Regional Healthcare Center.