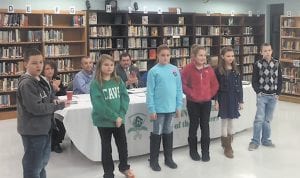 Durward Narramore Jr. has conducted his last meeting as chairman of the Jenkins Independent Board of Education.

He said it was during his Lexington stay that he learned bigger schools do not mean better schools, saying that he prefers the closer relationships between students and faculty members in a smaller system.

Narramore recently finished a term as president of the Kentucky School Boards Association and served as president-elect before that. He said the experience was very rewarding to him and he learned a great deal as well, meeting with elected officials on the state and national levels to advocate for education in Kentucky. 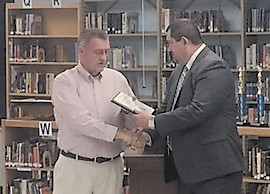 Outgoing Jenkins Independent Board of Education Chairman Durward Narramore receives an award in honor of his service.

Narramore told the board that serving on the school board is an honor, but one that comes with a great deal of responsibility. He emphasized that he has always believed that the students must come first and that there have been times when the board had to deal with educators who felt that their job was more important than the students. He also pointed to the tax structure in Kentucky which gives school boards the responsibility of choosing from several mandatory tax rates that are laid out by the state. He said it is always a difficult decision to raise taxes and pointed out that the tax rates for the Jenkins system have gone down during the time he spent on the board.

“We are elected by the people,” said Narramore. “But we owe our service to the students.”

Narramore also predicted that people who want to see the Jenkins system close and be absorbed into the county system are doomed to disappointment. He said the citizens of Jenkins should always ask elected officials to state their opinion on keeping the school system open when they run for office, and added that since board members run in staggered terms, it would likely take several election cycles to get enough board members on board to vote to close the system

“For those who want to see this district close, I feel bad for you,” he said. “I don’t look to see the system close, but it will take four our five election cycles to do it.”

Narramore thanked his family and the board members and staff who he served with during his tenure. He said he was especially appreciative of the assistance the system received from retired Pike County educator Frank Welch, who helped Jenkins during some trying times. Jenkins Superintendent Freddie Bowling said he is very proud to have been associated with Narramore and added that he has learned a great deal about the state educational landscape from him. Bowling said Narramore has been a “leaning post” for him in his first year as superintendent. Vice Chairman Tracy Goff, who has served on the board for 12 years, said that Narramore had initially convinced him to run for the board by telling him that the best way to change things he didn’t like was to get involved. Board members Eileen Sanders and Pauline Sexton also said they will miss Narramore’s leadership and are happy to have served with hm.

In other business, Burdine Elementary Principal Stacy Collier introduced the members of the Burdine Student Leadership Program Team (STLP) and introduced the board to the “Burdine Buzz”, an Internet magazine with a daily newscast that includes school news, sports, and interviews that are all produced by the students. The Burdine Buzz is available on YouTube, and to access it, just go to YouTube and type “Burdine Buzz” in the YouTube search engine.

Several members of the STLP attended the meeting and told the board about their work and the equipment they use in the production. Team member Austin Johnson also described the Digital Yearbook they created to expand the regular yearbook. He said it is available as an app for Android devices and iphones. The STLP will compete in upcoming regional and statewide technology competitions. STLP team members are Austin Johnson, Delaney Johnson, Kenna Anderson, Lindsey Anderson, Jaylee Collier, Jacob Kelly, Landon Moore, and Mackenzie Elswick. The STLP has also been invited to compete with the Burdine Buzz and the Digital Yearbook in the state STLP competition.

Jenkins High School Principal David Lee praised Lady Cav basketball standout Whitney Creech, who recently broke the 3,000-point mark in scoring. Creech is a junior at JHS and Lee predicted that she will finish her career as one of the all-time leading scorers in Kentucky and will have an outstanding college career. Boys’ basketball player Randy Potter broke the 1,000-point mark as well.

Damian Johnson for the excellent job he has done with the school’s technology needs. However, Bowling said the system has grown to the point that Johnson needs help and asked the board to create the position at a salary of $20 per hour for a seven and half hour day. The board voted unanimously to create the position.

Bowling also asked the board to hire two or three additional extended school service workers to help students with their work. Bowling said the workers can work with students during the school day and the position will pay $20 per hour for certified personnel and $15 for non-certified. The board voted unanimously to approve the request.