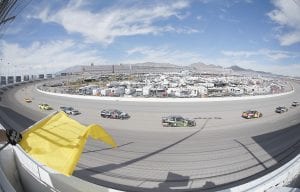 Moving swiftly to address driver safety concerns, NASCAR on Tuesday banned cool-down laps and will start allowing teams to hook up cooling units to their engines on pit road — the first major changes to the popular new knockout qualifying format unveiled this season.

The decisions were made during a conference call with crew chiefs. Several people who participated told The Associated Press that NASCAR initially said teams could use external fans on pit road to cool the engines. But after nearly unanimous objection, NASCAR relented on the use of cooling units.

NASCAR this season moved to the knockout format that has been widely praised as more entertaining. Drivers, however, were barred from cooling their engines on pit road because using the cooling units would mean opening the hood — and once hoods are open, NASCAR inspectors would have too difficult a time policing the pits to make sure adjustments were not being made.

The result? Drivers the last two weeks were slowing their cars to a crawl and circling the track at slow speeds at the same time other drivers were speeding past during their qualifying attempts — sometimes 150 mph faster.

Crew chiefs argued during the call that teams already own cooling units and forcing them to purchase external fans was an unnecessary cost. NASCAR officials claimed engine builders preferred the use of the fans, but that theory was widely rejected on the call so NASCAR permitted the use of the cooling units as long as they are hooked up through a flap on either side of the car. Teams can still not lift the hood of the car.

Two crew members will now be permitted to service the cars, but they must be wearing helmets when cars are on the track.

“The qualifying is new to all of us and as we have said over the past several weeks, we are looking at it from all aspects,” said Robin Pemberton, vice president of competition and racing development. “Following discussions, both internally and with others in the garage area, we moved quickly to make a few revisions that will be effective starting with our two national series events at Bristol Motor Speedway this weekend.”

The changes are in response to two weeks of driver complaints about the dangers of slow cars driving on the apron. There was even more concern this week as NASCAR heads this weekend to Bristol, where there is a decided lack of space on the 0.533-mile bullring.

“It’s going to be a tough one. I think the cooling will be obviously a little bit better this week just from the fact that it’s 15 second laps, the engine temps won’t get quite as high,” Paul Wolfe, crew chief for Brad Keselowski, said earlier Tuesday. “But yeah, trying to go out and cool down at Bristol, that could be a potential issue. There’s really no room to get out of the way, unless you’re just running around on the flat part there on the apron.”

NASCAR did not make a decision Tuesday on a second complaint — the practice of having cars back out of their spots on pit road at the start of each qualifying round. Sixtime NASCAR champion Jimmie Johnson called it “sketchy” and said “we’re going to start crashing cars just backing out, because you’ve got guys at various angles trying to back out.”

NASCAR said the cars will still back out at Bristol, in part because of procedures already in place at the track.