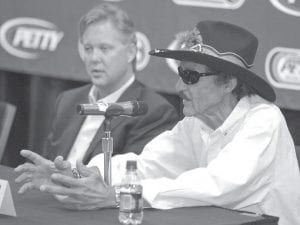 Richard Petty, right, spoke as NASCAR CEO Brian France, left, looked on during a news conference in this file photo. Even The King has been caught off guard by the severity of the recession that has caused NASCAR to tap its brakes: Automakers are entering Chapter 11 bankruptcy protection, team sponsors are slashing budgets and fans are struggling to scrape up the money to attend races. “The economy, it’s hit us between the eyes,” Petty said. (AP)

Fans cringed and teams shuddered when NASCAR opened its doors to Toyota, the first foreign automaker to enter a sport built around American cars.

Competitors feared that a deep-pocketed company with its free spending and technological savvy would run wild over the loyal supporters of Detroit’s Big Three manufacturers. Longtime fans simply couldn’t stomach a Japanese car racing side by side against their red, white and blue models.

It’s now been five years since Toyota eased into NASCAR in the third-tier Truck Series — three since the automaker graduated into the premier Sprint Cup Series — and a foreign brand didn’t bring the sport to a halt. Nor did it ruin the racing. If anything, its improved both the competition and overall health of the industry.

Now, NASCAR says it is willing to consider other foreign automakers.

BMW, Honda, Hyundai, Nissan, and Mercedes-Benz all have manufacturing plants inside the U.S. — the same criteria Toyota met when NASCAR accepted the automaker into NASCAR in 2002 — and Volkswagen is building a facility in Tennessee. Any of those manufacturers can approach NASCAR about coming on board, and chairman Brian France is apparently willing to listen.

“We’re the pre-eminent place in North America for car manufacturers to build their business with an auto racing group,” France said. “We remain that and clearly there’s some companies that are going to look at opportunities that may not have even been there in the past that could be presented in the future.”

That his comments came at Michigan International Speedway — a short drive from the home offices of Ford, GM and Dodge — probably didn’t sit well with those in NASCAR.

But on what grounds can any American automakers object to NASCAR allowing more manufacturers into the sport? Chrysler and GM are in Chapter 11 bankruptcy protection, and the restructuring plans have led to cutbacks in each auto racing budget.

Dodge flagship owner Roger Penske says it’s been business as usual for his team since Chrysler’s filing. But Richard Petty Motorsports cut salaries across the board and laid off at least nine employees last week as it prepares for significant shortfalls in Dodge funding.

Then came GM’s decision late last week to end its support of teams in the lower-tier Nationwide and Truck Series, a cutback that slashes the bottom lines at race teams owned by Dale Earnhardt Jr., Kevin Harvick and every organization not run by a big-time NASCAR star. The pullout leaves Toyota as the only manufacturer supporting teams in either of those series.

But GM’s cost-cutting could also reach the Cup series as early as this week, and every Chevrolet- supported team has got to be on edge as owners wonder just how much cash might vanish from the 2009 budget.

Never mind the flashes of muscle shown by Toyota the past year, Chevrolet is still the top player in NASCAR with great success spread among a diverse lineup of teams and drivers. Chevy teams have won 13 of the last 16 Cup titles, and Mark Martin’s victory Sunday was its eighth in 15 races this season.

There were 14 Chevy’s in the 43-car field Sunday, and six of the 12 drivers currently qualified for the Chase for the championship are GM-supported. If that money dries up, particularly before the end of the season, it will have wide-ranging effects on the competition.

There would be no way for Richard Childress Racing to revive its slumping program before the end of the year, and Juan Pablo Montoya would have an extremely difficult time making his first Chase. Tony Stewart’s bid to become the first driver/owner to win a championship since the late Alan Kulwicki would become much harder, and many longtime loyalties to Chevrolet could be tested.

So why shouldn’t NASCAR let more manufacturers into the sport? Two of the three current participants are struggling to pay the bills, and Ford isn’t exactly on stable ground. Even mighty Toyota has taken a hit this year, and as the only player in Nationwide and Trucks, the company will likely have to reconsider spending money on those series.

France needs to make decisions based on the long-term health of the industry, and worrying about rankling fans who only buy American can’t be a consideration. With sponsorship opportunities dwindling, many teams are hanging on by a thread. They need money and they need manufacturer support, and without it, they’ll eventually vanish from the NASCAR landscape.

The automakers’ current economic woes will eventually jeopardize everything a NASCAR fan wants: full fields, competitive racing and exciting drivers to cheer every weekend. By opening the industry to more foreign automakers, NASCAR could take a significant step toward stabilizing the future of the sport.