NASCAR gets tougher to protect its brand 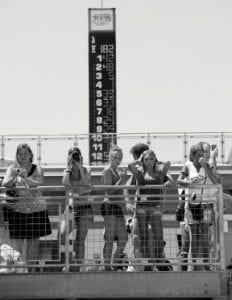 Fans gathered on the top of the stands overlooking the garage area during practice for the NASCAR Brickyard 400 auto race at the Indianapolis Motor Speedway in Indianapolis on July 24. Any sports event that draws an estimated crowd of 180,000 has to be considered a smashing success. Except when it drew 270,000 two years earlier. There were empty seats at Sunday’s Brickyard 400, leading some to wonder whether one of NASCAR’s marquee events has lost a little bit of its luster. (AP Photo)

Concerns about a half-empty race track dogged NASCAR long before Sunday’s race at Indianapolis Motor Speedway, where the sanctioning body’s top officials didn’t want to discuss attendance or any other ailments plaguing the nation’s No. 1 racing series.

The conversation was instead steered to all the things NASCAR is doing right, a theme that became evident before the season started, when competitors spread a message of hope and unity.

Turns out that the racing series was serious about keeping everybody on point.

The Associated Press has learned that NASCAR warned teams during the off season that public criticism of the sport would no longer be tolerated, and at least two star drivers have been fined — one as much as $50,000 — for comments that were deemed destructive to the industry.

NASCAR spokesman Ramsey Poston on Monday night confirmed some action had been taken, but would not discuss details.

“It is the sanctioning body’s obligation on behalf of the industry and our fans to protect the sport’s brand,” Poston said. “Any action taken by NASCAR has nothing to do with the drivers expressing an opinion — it’s focused on actions or comments that materially damage the sport.

“We have specifically discussed this in meetings with teams, drivers and stakeholders.”

Drivers all declined to publicly discuss the policy, but it shouldn’t come as any surprise — considering NASCAR’s heightened effort this year to re-ignite interest in a sport that’s been fighting sagging attendance, declining television ratings and overall fan apathy for several seasons.

NASCAR has taken several aggressive steps toward improving the on-track product, but its top brass decided that outstanding events aren’t enough to overcome the negative perception created every time a driver publicly blasts the series.

“It doesn’t make sense to criticize the food in a restaurant if you expect people to come back,” has been chairman Brian France’s season-long mantra, and it became clear very quickly that he’d personally delivered that message in a series of off season meetings with every Sprint Cup Series team.

What came from those sessions was a concerted effort to pull everyone in the industry in line when it came to NASCAR’s attempts to stop the bleeding. In stop after stop during the January preseason media tour, drivers, team owners and top executives went out of their way to heap unsolicited praise on NASCAR and the direction the sport is heading.

Such an organized effort raised eyebrows, but didn’t feel fake or forced because — for the first time in recent memory — everyone seemed to recognize what was at stake. Of all professional sports, NASCAR was hit hardest by the recession.

Corporate sponsorship, the lifeblood of auto racing, dried up and several longtime team owners were put out of business. Others needed mergers or significant reductions to stay afloat, and industrywide layoff s put more than 1,000 team members out of work following the 2008 season finale.

Adding to NASCAR’s woes was the crippling effect the economy had on its fan base, a predominantly blue-collar bunch that found itself unable to make mortgage payments let alone afford tickets to three-day race weekends. Then came a growing discontent with the actual racing, fueled in part by NASCAR’s heavyhanded rulings and mandated use of a redesigned race car that fans and drivers never embraced.

After his March 2007 victory in Bristol in the first race with the new car, Kyle Busch proclaimed to anyone who would listen that the car “sucks.” NASCAR officials believe that jarring assessment forever tainted the car in the eyes of the fans.

Similar instances have followed, among them Tony Stewart comparing NASCAR’s officiating to professional wrestling, harsh criticism from drivers over “boring races” and questions about the timing of debris cautions.

NASCAR clearly felt it had to get in line with other pro sports leagues, which routinely fine competitors, coaches and owners for critical comments and questionable behavior. Earlier this month, the NBA fined Cleveland Cavaliers owner Dan Gilbert $100,000 for a controversial letter to fans that criticized LeBron James.

So on one hand, NASCAR’s decision to police the series in a similar manner makes sense: At a time when nearly every decision made is designed to help the sport rebound, this is the most effective way of protecting the brand.

But it’s also a slippery slope. NASCAR fans often choose their favorite drivers based on personality and competitive fire, and after years of complaining that the stars had become too corporate, the racers this year were urged to let loose. From the “boys, have at it” policy that permits more aggressive driving, to NASCAR encouraging drivers to cut back sponsor plugs in favor of raw emotion, now asking them to bite their tongue is a mixed message.

For now, it seems that NASCAR has a fairly high-tolerance for what competitors can and can’t say — only drawing the line at comments it believes encourage fans to stop following the sport.

But it will be up to the fans to decide if this is truly a good policy or not. Going forward, who knows now if the drivers will feel comfortable enough to speak their minds? That’s always been one of NASCAR’s top draws, and it’s something the series can’t afford to lose.