NASCAR is pushing its chips on sports gambling 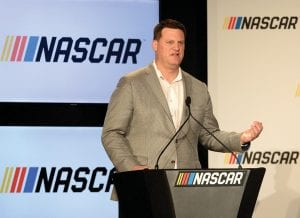 NASCAR is on board — and on the boards of sportsbooks from Nevada and beyond — with legalized betting in 2019. “I wanted to go all in on gambling last year,” NASCAR executive Steve O’Donnell, above, said. (Jeff Siner/The Charlotte Obsserver)

Brendan Gaughan is the son of a casino magnate and has long grasped the allure of throwing down a few bucks to wager on a sporting event.

Heck, Gaughan once bet on himself in Las Vegas to win the 2004 Daytona 500. Gaughan got a stern talking to from NASCAR back in the day when gambling was perhaps the most taboo topic in sports. March Madness brackets, Super Bowl prop bets, they all go hand-in-hand with the biggest games as much as the highlights, but wagers on the upstart underdog or 5-1 favorite were saved for Vegas, office pools and the neighborhood bookie operating illegally.

But societal attitudes — and more to the point, laws — toward betting have evolved, leading even sports leagues to loosen their stances as a new world of potential partnerships and revenue streams has opened.

Count NASCAR as the latest sport racing toward the gambling industry.

“The more people betting and playing fantasy games on your sport, the more people watch,” Gaughan said during Daytona 500 qualifying. “NASCAR has always known that. They still know that.”

Gaughan is happy to give NASCAR fans and the betting public the latest inside scoop on the sport. He co-hosts both the “Fantasy Racing Preview with Pete Pistone” on SiriusXM and “Gone Racin” on VSiN, a national sports gambling news network.

“When it comes to fantasy sports and betting on NASCAR races, there’s nothing wrong with it,” Gaughan said.

NASCAR is on board — and on the betting boards of sportsbooks from Nevada and beyond — with legalized betting in 2019.

“I wanted to go all in on gambling last year,” NASCAR executive Steve O’Donnell said.

But NASCAR took a step back and scanned the gambling landscape before implementing gambling guidelines in the rulebook for this season. Among the new restrictions: drivers and team members are banned from betting on races or disclosing confidential information. They are allowed to participate in fantasy sports relating to the three national touring series, Cup, Xfinity and Truck, but may not accept prizes with a value of more than $250 in any games. The bans are in line with other major sports.

NASCAR partnered with Sportradar Integrity Services to develop a comprehensive gambling policy intended to protect the sport from cheating scandals.

“We have so many people that are linked to the cars. I think the integrity is a big piece to it,” O’Donnell said.

But fans? Get ready for action.

Dover International Speedway, because of its alliance with Dover Downs Hotel & Casino on the same property, pounced and opened an on-site kiosk for its fall race and became the only track that allowed sports gambling on its property. The white tent was nearly as popular a stop as a selfie in front of the Monster Mile and the track will bring it back for the May race.

“I would consider it a success from the standpoint of the fan interaction, the fan education,” said John Hensley, general manager and senior director of horse racing and sports betting at Dover Downs. “We never went into it looking at it as a revenue generator. We always looked at it as just an additional amenity for that motorsports fan. Just based on the experience and word of mouth from the fall race, I would anticipate a greater flow of traffic for the spring, for sure.”

Football, basketball and baseball historically generate the bulk of sports betting and NASCAR has yet to spark interest among the masses. Vernon Kirk, director of the Delaware lottery, said full-scale sports betting started in Delaware on June 5, 2018, and less than one-tenth of 1 percent has been wagered on auto racing ($129,250 out of $134,707,750).

And there’s already a hitch that could slow bets: NASCAR this season has decided for the first time to strip drivers of victories if their cars are deemed illegal. There will be a roughly 90-minute inspection after the race and the winner will not be deemed official until the process is completed. Will fans really want to linger around the pay window another couple of hours just to cash in a ticket?

“The state’s risk manager will delay any payout until NASCAR releases the official order of finish,” Kirk said. “Our casinos will receive an email reminding them of NASCAR’s new procedures the week of Daytona.”

The betting lines supplied by William Hill are set: Kevin Harvick and Kyle Busch are 5-1 favorites to win the 2019 Cup series championship. 2018 champ Joey Logano checks in at 7-1. For Sunday’s Daytona 500, Harvick has 15-2 odds, Logano is at 8-1 and Brad Keselowski is also at 8-1 to win “The Great American Race.”

Fantasy NASCAR is already popular with both Fanduel and DraftKings offering bettors the chance to create lineups each week. With only one elite series race each weekend, NASCAR has less volume than some of the stick and ball sports.

“Most people will say that the online experience is really where the volume is going to be,” Hensley said.

There are more gambling tieins for the sport on the horizon: Speedway Motorsports Inc. and EquiLottery Games announced plans for Car Cash, a three-number lottery draw game based on race results. NASCAR also will allow race teams to have sports gambling sponsors at all races.

Anyone in NASCAR caught breaking the gambling rules faces the possibility of suspension, indefinite suspension or termination.

“The rules are in place,” Hensley said, “but you can’t legislate human behavior.”