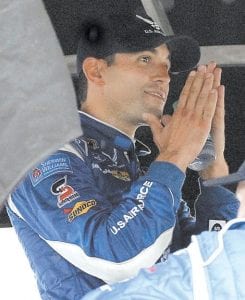 When the sky opened for a third time during the rain-rescheduled race at Daytona and teams pulled out car covers to wait out the weather, it seemed the right time for NASCAR to put the Coke Zero 400 out of its misery.

The entire weekend was plagued by rain and cars never got near the track for the scheduled Saturday start. When the race finally did begin on Sunday — delayed, because of rain on the pace laps — it went a whopping six laps before the cars went back to pit road for a 25-minute rain delay.

Then came the on-track carnage: A 16- car crash seconds before a scheduled competition caution, and a 26-car crash before another shower. A total of six drivers managed to avoid accidents, leaving just 17 cars on the lead lap.

It would have been comedic if it wasn’t such a disastrous day for one of the biggest events on the NASCAR schedule. So pulling the plug seemed like such a logical decision when the track was soaked through shortly before 3 p.m. 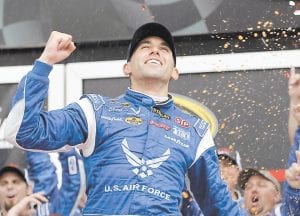 Drivers — especially those who were lined up behind winner Aric Almirola when the race was called with 48 races remaining — thought otherwise.

And so did the fans.

Using social media to vent their frustration, fans blasted NASCAR for calling the race so early. Daytona International Speedway has lights, and they claimed they were willing to hang in there until they saw one driver take the checkered flag.

They were robbed of that right when NASCAR threw in the towel, they argued, and a race is not complete until someone crosses the finish line.

“I know a lot of the fans tuned into the TV and stuck around at the race track waiting to see a finish,” said second-place finisher Brian Vickers. “I was expecting them to wait a little bit longer knowing that we have lights here and it was going to be a night race anyway.”

Those fans do have a point. But when posting from their living room with the race on the television, it doesn’t really apply.

Weather has wreaked havoc on four events this season, including the waterlogged Daytona 500, which needed a stoppage of more than six hours. Then came Bristol a month later, and that race needed two stoppages of more than five hours.

Both times, there were fans that stuck around and waited out the finish. And both times, the television window was stretched, but NASCAR’s partners worked with the series to keep the events on TV.

Texas in April was just like Daytona on Saturday. It rained hard all day, and the cars never got on track. So NASCAR came back the next day, a Monday, and got the race completed under a sunny sky. Some fans stayed, some left, but the television audience was appeased.

Daytona was an entirely different animal.

It was a long holiday weekend with the party scheduled for Saturday night’s main event. Rain had caused a wreck in the Nationwide Series shortened qualifying session, and the race was delayed on Friday night by more rain.

When Saturday night racing for the Sprint Cup Series was scrapped, NASCAR and track officials picked an early start for Sunday to create the largest possible window to run the race to completion. But that final shower that spoiled it showed no signs of letting up until at least 8 p.m. and it would likely take two hours to dry the track when it did finally stop.

Sure, there are some fans who would have waited out the bitter end. But plenty others had to get on the road to return home for Monday work.

NASCAR had to make a decision, and not stretching Sunday into a 12-plus hour day was the right call.

“We looked at forecasts and the potential of a few more hours of rain, we decided we were past halfway and just called the race,” NASCAR vice president of competition Robin Pemberton said. “We felt that it was in the best interest of fans, getting done and going home and competitors being done. We put on two-and-a-half hours or so of solid racing and when you looked at what was in front of us weather-wise, we felt it was just best for all concerned that the race was concluded.

“We didn’t think there was an opportunity to get a good race in.”

Vickers and Kurt Busch and several other drivers felt they’d waited through a wet weekend to get to that point, so they had no problem sitting in their motorhomes to wait for another shot to race for the win.

But for those working concession stands, or security or ushers, it was yet another very long day. Same for the crews, who have few places to go to wait out the weather. So they crowd under covered pit stands or jam into the team hauler and numbly pass the time.

NASCAR knew holding everyone was unfair, especially since the next wait could have been up seven hours. The series had to set a stopping point to give the fans some closure — not the fans at home, who were warm and dry, but those sitting in slick metal grandstands wearing garbage bags to shield themselves from the rain.

“We didn’t think there was an opportunity to get a good race in,” Pemberton said.