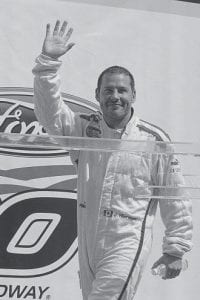 When Juan Pablo Montoya made the jump from Formula One to NASCAR, his move was met with anticipation.

Jacques Villeneuve hasn’t been received quite the same way. The former world champion has been criticized – even vilified – for choosing Talladega Superspeedway to make his Nextel Cup debut.

Four-time Cup champion Jeff Gordon led the charge and ignited a unified cry across the garage that NASCAR’s biggest and fastest track was not the appropriate place for any driver to make his first start.

The drafting is difficult, the racing intense and the added unknowns from running the Car of Tomorrow in its first restrictorplate race made Talladega a peculiar place for Villeneuve to debut.

“I don’t care if you are Michael Schumacher, Jacques Villeneuve, Dario Franchitti or the greatest driver on the planet – you should not be running your first race this weekend,” Gordon said before Sunday’s race.

And when he qualified sixth, putting him at the front of the field at the start of the race, the 12 drivers competing for the Nextel Cup title couldn’t help but worry that inexperience in the art of bump-drafting would surely cause Villeneuve to trigger a massive pileup that would wreak havoc on the Chase for the championship.

Villeneuve never flinched, insisting that his credentials and race savvy earned him the right to race at Talladega.

Then he went out and proved it.

Villeneuve ran a clean race, and opened it with the classy decision to voluntarily get out of the way by dropping to the back of the field before the green flag. He didn’t cause any wrecks, didn’t affect the Chase and spent the entire 500 miles learning as much as he could.

And when Gordon crossed the finish line for the 12th platerace win of his career, Villeneuve wasn’t far behind. He finished a respectable 21st – on the lead lap – and forced Gordon to give him a favorable assessment.

“The fact that he didn’t run into anything and that he had a clean race and finished on the lead lap says a lot,” Gordon said. “I’m glad he was here and he got to run here. I hope he got to mix it up there at the end to see what it’s really like and got this experience.”

That’s all Villeneuve wanted, a chance to get some laps before he attempts to run a full Nextel Cup schedule next season. He was self-deprecating during the tense buildup to the race, joking that the attacks paled in comparison to the cutthroat dealings of European racing.

“I’ve always tried to race intelligently,” he said. “I am not here trying to be a hero. I don’t have any points, I am not in it for any championship. All I want to do is get the mileage.”

Those who actually know Villeneuve and have raced against him never doubted he would do his best to avoid trouble. He spent time visiting Montoya, who made his stockcar debut at Talladega last season in a low-level ARCA event, and Franchitti, who made his debut Friday in the ARCA race.

“I spoke to Jacques about it and the thing is, he’s a very sensible guy,” said Franchitti, the reigning IndyCar Series champion who is moving to NASCAR next season.

“We’re not in a position to comment about it because we’ve never done this before so we can’t say if Jeff Gordon is right or wrong. He’s won a bunch of these races. But Jacques obviously thinks what he’s doing is right as well.”

It’s unclear why Villeneuve was even subjected to the criticism. He’s won the Indianapolis 500, a CART title and was the 1997 world champion. With 11 F1 wins and 23 podium finishes, his résumé is actually better than Montoya’s.

But unlike Montoya, who walked away midseason from a rich contract with the mighty McLaren team to move to NASCAR, Villeneuve was at the end of his F1 career. He’d had a turbulent three years and sat out all but the final three races of the 2004 season.

He landed a two-year contract with Sauber for 2005 and 2006, but it wasn’t smooth and he always seemed in jeopardy of losing his seat. He eventually did before the close of the 2006 season and had done very little racing since.

So while Montoya was portrayed as a maverick for moving to NASCAR, Villeneuve is viewed as a driver who had very few options. It opened the door for doubts, but should not have diminished his talent level.

Villeneuve showed Sunday that just like Montoya, he can handle NASCAR and is willing to ease his way into it by asking questions and learning on the job.

“The finger was being pointed a little bit before the race, understandably,” Villeneuve said. “The goal was just to stay out of trouble and not make enemies. Deep down, I’m sure they knew I wouldn’t do anything stupid.”