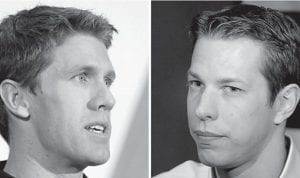 Carl Edwards, left, has been put on probation for the next three races by NASCAR for intentionally wrecking Brad Keselowski near the end of Sunday’s Sprint Cup race in Atlanta, Ga. (AP photos)

Sticking with its “boys, have at it” attitude, NASCAR placed Carl Edwards on probation for three races Tuesday for deliberately wrecking Brad Keselowski’s car last weekend in Atlanta.

Edwards will be monitored by NASCAR through the April 10 race at Phoenix but may drive in the Sprint Cup and Nationwide Series.

NASCAR president Mike Helton said Edwards acted unacceptably Sunday but did not cross the line in what the sanctioning body will allow this season. NASCAR promised in January to give the drivers more leeway in policing themselves and settling scores in an effort to energize the sport.

“We made it very clear to (Edwards) that these actions were not acceptable and did go beyond what we said back in January about putting the driving back in the hands of the drivers,” Helton said. “We believe (Edwards) understands our position at this point.”

There had been a strong call from fans and analysts for NASCAR to suspend Edwards, who returned to the track down 153 laps from an earlier accident with Keselowski and intent on wrecking his car. He tried for at least one lap before succeeding with three laps to go, nudging Keselowski’s car and sending it airborne. The car banged hood-first off a retaining wall before flipping back onto its wheels. No one was hurt.

“They are not in an enviable position when it comes to these matters, but they do an outstanding job,” he said in a statement, adding it was unfortunate the accident overshadowed Penske Racing teammate Kurt Busch’s victory.

Edwards acknowledged his action was intentional but said he was surprised by Keselowski’s car taking flight. Because NASCAR approved greater driver leeway before the season, a severe punishment for Edwards most likely would have quashed the “have at it” attitude after the first test.

The decision to lighten up after years of penalizing drivers for minor infractions — Dale Earnhardt Jr. was once punished for cursing on TV; Jeff Gordon was placed on probation for shoving Matt Kenseth — was in large part due to increased fan excitement created by some 2009 feuds.

Denny Hamlin had a monthslong dispute with Keselowski, an aggressive young driver who has made no apologies for banging fenders with established veterans. Tony Stewart and Juan Pablo Montoya played retaliatory bumper-cars in the season finale at Homestead.

Helton said the day after the finale that NASCAR had perhaps gone too far in sterilizing the competition and acknowledged that more emotion and personality could benefit the sport. The “have at it” era was announced less than two months later, and Helton was not backing down Tuesday.

“The clear message, I think, we sent in January was that we were willing to put more responsibility in the hands of the driver,” he said. “But there is a line you can cross and we’ll step in to maintain law and order when we think that line’s crossed.”

Just what is that line?

“I think we see it when we see it,” he replied.

“I think there’s a too far in everything and that was too far. Bottom line. Simple as that,” Bowyer said. “That was a pretty scary incident that could’ve been a lot worse.”

The fairly lenient punishment — many view probation as a slap on the wrist — drew swift and mixed reaction from drivers who jumped to their Twitter accounts during Helton’s 20-minute announcement.

“Huh!” wrote Kevin Harvick, who was suspended one race in 2002 for insubordination — he parked his truck at the door of the NASCAR hauler when he was summoned to discuss rough driving at Martinsville.

“I’m thinking about asking for a refund for all of my penalties!!!!”

“You can’t ask the driver to take their gloves off one week and then tell em to put ‘em back on the next,” Waltrip wrote.

Helton said NASCAR saw two distinct parts to the accident : Edwards’ action; Keselowski’s car going airborne. The more serious of the two, in NASCAR’s opinion, is figuring out why Keselowski’s car acted as it did.

“That’s something that is very important to us, and we want to study very closely to figure out things that we can do to help prevent this very quickly in the future,” Helton said. “This is a very important element of all of this, that I would ask all of us to be reminded of the fact of the car getting airborne was a very serious issue.”