NASCAR’s traveling road show pulls back into Daytona Beach this weekend for the annual rite of summer known as the Pepsi 400. It also marks the halfway point of the Nextel Cup schedule that makes it the perfect time to grade a few organizations and individuals on the year they have had so far.

There is no scientific process to this evaluation, just one man’s simple observations that at times may be a little biased. (I have been told that many times both in person and by email.) As has been the case in the past, it seems that the usual “good students” continue to get the high marks while the rest of the class is playing catch-up, but there are a few surprises so far this season. Let’s get started by giving the megateams their marks.

Hendrick Motorsports: It doesn’t matter if Steve Letarte or Chad Knaus ever show back up at a track this season. With the year their drivers Jeff Gordon and Jimmie Johnson have put together, 2007 has already been a huge success. Kyle Bush may be leaving the organization at the end of the year but he should also make the Chase giving Hendrick three teams in the playoff round. Even their first-year driver, Casey Mears, has visited victory lane this season, which helps give this organization the top ranking with a solid A. 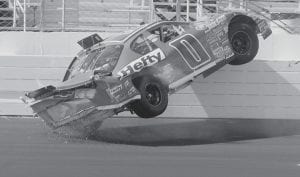 Eric McClure got his Hefty Chevrolet up on the wall in turn 3 during the NASCAR Busch Camping World 200 auto race at New Hampshire International Speedway in Loudon, N.H., on June 30. (AP Photo/Toby Talbot)

Richard Childress Racing: Kevin Harvick’s wins at Daytona and in the all-star race give this three-team operation a solid year, but with fellow teammates Jeff Burton and Clint Bowyer entrenched in the top 10, a title is not out of the question. They more than earned their A.

Joe Gibbs Racing: All three of Gibbs’s drivers have had solid runs this season with Denny Hamlin and Tony Stewart fixtures in the top 10, but only Hamlin’s Chevy has been able to find the way to victory lane. J.J. Yeley has also been coming on as of late but until Gibbs can put a few new trophies on display, it will not be the kind of year they were expecting. They earn a B.

Roush Fenway Racing: Gone are the days when all five of Roush’s teams would dominate each weekend. They lost their star power when Mark Martin left and it seems they are looking for one of their drivers to step up and be the organization’s leader. Matt Kenseth is solid every week but it looks like Carl Edwards is going to become the face of Roush’s mega-operation. With only two teams in the top 10, Roush gets a C for the first half of the season.

Penske Racing: Where have you gone, Rusty Wallace? This operation also needs a leader, as Ryan Newman and Kurt Busch are just not big fan favorites. Newman has returned to his old self in qualifying, but the duo needs a win to turn the team’s fortunes around.They get a C as this team has too many resources at their disposal not to be making trips to victory lane.

Dale Earnhardt Inc.: They lost the sun and the moon when Jr. said he was leaving, but they haven’t missed a beat on race day. Martin Truex’s win along with re-signing his sponsor for next season gives DEI something to build on for 2008. Jr.’s popularity will not be replaced but his talent behind the wheel could be with the right driver. Even with all that has taken place this season, DEI has both drivers in the top 12 with a chance to make the Chase; that earns them a B-.

NASCAR: It’s been a tough year on the sanctioning body from the beginning with the black cloud that Michael Waltrip’s problems at Daytona caused to Hendrick Motorsports’ fines and suspensions over bending the rules of the new Car of Tomorrow. It hasn’t helped that TV ratings continue to drop, but unless the start of races become more uniform, it is tough for fans to plan their Sundays around NASCAR’s ever-changing schedule. NASCAR still does the best job of any governing body of a sport in protecting and promoting its product, and even though it doesn’t always make the call that you or I would make, the officials sure keep our interest in the sport. They earn a B but if a few Fords, Dodges or even a Toyota could have made it to a couple more victory lanes, then all would have been right in the racing world and Brian France and Company would have an A.