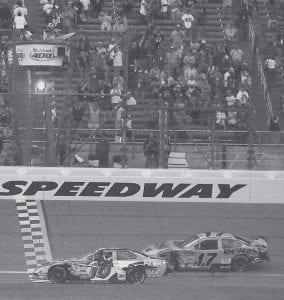 NASCAR is unlike any other sport, and accepting that is essential to analyzing the events at Kansas Speedway. With a fluid rule book and an arbitrary policing system, what’s right one week can be wrong the next.

A car part that sails through inspection for two seasons can suddenly be deemed illegal.

A penalty system for cursing during television interviews can be randomly applied.

And sometimes the driver who crosses the finish line first isn’t always the winner.

It all happened during a bizarre weekend in Kansas, where drivers, teams and fans were stunned by a handful of NASCAR decisions.

Kyle Busch won the Busch race Saturday, and his Hendrick Motorsports crew was long gone from the track when NASCAR alerted them that his intake manifold had failed inspection. NASCAR isn’t publicly saying what’s wrong with the part, but Hendrick executives insist the part had never before been flagged in several previous inspections.

Tony Stewart dropped an “Fbomb” when approached by a live ESPN camera, and the garage area bristled about the points hit the two-time series champion would take for uttering the profanity. It was a no-brainer (or so they thought) because Stewart was popped 25 points and $25,000 a month earlier for using a tamer curse on a telecast.

But NASCAR decided it won’t punish him this time, deciding Stewart didn’t know the camera was on. Never mind that excuse didn’t work for Juan Pablo Montoya when he playfully flipped the bird at a camera earlier this season.

And then there was the finish to Sunday’s wild Nextel Cup race, which will forever show was won under caution by Greg Biffle. But Biffle was the third car to cross the finish line, and most of the field was in agreement that he didn’t win.

It was so confusing to the teams that Clint Bowyer’s crew began celebrating when he crossed the finish line first, and Biffle was put in the awkward position of having to angrily defend his victory.

Biffle was out front with Bowyer hot on his bumper when Montoya’s exploding tire brought out the caution with four laps to go in a race that had twice been delayed by rain and shortened 85 miles because of impending darkness. It should have set up an overtime finish, but as the last bit of daylight faded over the track, Bowyer himself said the darkness made him leery of restarting the race and attempting to score a coveted victory on his homestate track.

NASCAR agreed and called off a restart, setting up a final three-lap parade under caution to the finish.

The field was frozen, the finishing order set.

But the gas light flipped on in Biffle’s car, and it began to sputter as his tank neared empty. “The Biff” has had a tough two seasons, and as he neared that finish line, he said he was desperate to conserve enough fuel to do a celebratory burnout.

So he claims he shut off the engine coming out of the last turn and started steering his car with his knees so he could unbuckle his belts and get ready for the party. Then he inexplicably slowed his car to a near stop before the finish line, and Bowyer and Jimmie Johnson didn’t know what to do.

So they passed him.

Bowyer crossed the finish line first and his crew began an instant celebration. Johnson followed, and Biffle finally made it in third.

Nobody was sure what exactly had happened, and NASCAR’s own timing and scoring system wasn’t able to clear it up: It too listed Bowyer as the winner.

NASCAR quickly intervened, directing Biffle to Victory Lane under the premise that the race was under caution, the field was frozen and passing is not permitted. But there’s something about maintaining a reasonable pace in the rule book, and none of the drivers thought Biffle abided by it.

“You have to maintain a reasonable pace ¿î and that is in NASCAR’s judgment if that was a reasonable pace,” said fifthplace finisher Jeff Gordon. “Everybody was slowing down trying to figure out what he was doing. We were almost at a stop to run his pace and the pace car was driving away, so we all just started going by him.

“In my opinion, he didn’t win that race. Clint Bowyer won the race. He is the one who maintained the pace.”

NASCAR disagreed, and quickly said the situation was not at all like the Busch Series fiasco in Montreal, where race leader Robby Gordon was spun under caution but not permitted to reclaim the lead because the spin rendered him incapable of maintaining the pace.

What’s different? Gordon, with 79 career victories and four series championships certainly didn’t know, and neither did the rest of the field.

So NASCAR explained that its maintaining pace rule applies to the cars in the incident ¿î not the winner headed to the checkered flag. It left Bowyer, Gordon and Johnson incredulous, and Biffle downright angry. When questioned repeatedly about it, he intimated that a reporter was harping on the issue because he had been rooting for Bowyer to win the race.

No, Biff, people are rooting for a little consistency from NASCAR. Or maybe a clearer rule book that doesn’t receive regular additions.

Stewart said earlier this year that NASCAR is a lot like professional wrestling in that it’s staged and the top competition officials play a role in deciding the outcome. Of course it’s not true, and Stewart himself quickly backpedaled from his accusations.

But it does seem like the rules are often made up along the way. Exceptions are made, loopholes are found and amendments are made to the rules.

It’s confusing to the teams, drivers and fans, who filed out of Sunday’s race past a scoring tower that showed Bowyer, not Biffle, was the winner. But NASCAR has always been this way, and probably always will be.

It’s an arbitrary sport centered on machines and moving parts and pieces that, much like NASCAR, can never be nailed down.