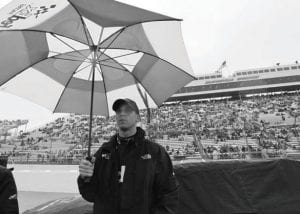 Who’s still talking about the surprising win by driver Denny Hamlin, above, at Martinsville Speedway? NASCAR needs to do away with its “outdated breaks” to keep up interest and momentum in the sport.

Remember that time Jimmie Johnson drove from sixth to first at Bristol in the blink of an eye? How ‘bout that time Denny Hamlin bulldozed his way through the field to save a win at Martinsville Speedway?

They were actually the two most recent Sprint Cup races.

It doesn’t seem that way, though, because of both NASCAR’s oversaturated schedule and a steadfast hold on outdated breaks. The result is unfortunate this season for NASCAR, which has been unable to build any momentum despite some very good racing.

Everytime NASCAR gives the fan something to talk about around the office cooler, the conversation has had to hold for an unnaturally long time. Carl Edwards’ intentional wrecking of Brad Keselowski made headlines on and off the sports pages, but was followed by a full week of silence because of NASCAR’s traditional first “off week” of the season.

Nevermind that it came after just the fourth race of the year, and in a slot where there was no need for a break. Under the current rules package, the natural spot for a break is after the fifth race, otherwise known as the cutoff for the guaranteed starting spots in the field for the top 35 teams from the previous season.

Racing five weeks through the top-35 mark and then taking a break would be OK. But four weeks? Then a break? Then Bristol? It just doesn’t make any sense.

After the Atlanta break came two weeks of short track racing, Bristol and Martinsville, and in theory those two rough-andtumble consecutive weeks make sense. No one could have predicted, though, Johnson’s masterful drive through the field to steal his first career win at Bristol in a race Kurt Busch had pretty much locked up.

Then came the race at Martinsville, which opened as a make-orbreak event for popular preseason favorite Hamlin. A good finish at one of his very best tracks was an imperative validation to his early hype, and a bad race could signify some serious problems for the championship contender.

Then, a day before the race, he announced plans for immediate reconstructive surgery on a torn knee ligament he’d hoped to nurse through the season. That, many figured, was the final nail in Hamlin’s disappointing season.

Instead, he raced hard all day at Martinsville and charged through traffic over two final sprints to claim a jaw-dropping victory.

Finally! Some momentum for NASCAR!

The scheduling makes little sense for a series that races 38 weekends over 10-plus months. When it picks up this weekend in Phoenix, the racing runs for the next 14 weeks without a break.

Then comes one off week in July, a five-week stretch of racing that pretty much decides the Chase for the Sprint Cup championship field, an off week before Labor Day and then 14-straight weeks to end the season.

That’s right: Two breaks over the first six weeks of the season, followed by two breaks over the final 31 weeks. There’s no room for makeup days when rain washes out an event. But there’s a long stretch of racing over the dog days of summer that leaves everyone desperate for a break.

Nevermind the overcrowded schedule that defies conventional wisdom of leaving fans wanting more. There’s never a hunger for more racing because the season stretches from February to November, a schedule so long that very few events feel important, or special, anymore.

But contracting races is likely never going to happen, even though there are spots on the schedule that could and should be dropped in a heartbeat. Greed by NASCAR and track promoters will always stand in the way of doing the smart thing, which is a closer to a 30-race schedule that puts a premium — even if it’s just a small premium — on the events.

At a time when Speedway Motorsports Inc. owner Bruton Smith wants a date for his Kentucky track and a second date in Las Vegas, and NASCAR sister International Speedway Corp. wants a second date in Kansas but stubbornly won’t consider cutting one of California’s underwhelming two events, shortening the schedule is a pipe dream.

So, NASCAR should turn its attention to better scheduling. Re-evaluate the off weekends, and reconsider taking Easter weekend off . The current format is tired and outdated and does nothing to benefit the industry.

After all, whose still talking about Hamlin’s finish?