With the first round of winter testing now over at Daytona International Speedway, it is safe to say that the 2008 Sprint Cup Season is in full swing. Forget about waiting until next month when they actually start awarding points at Daytona to say the season is underway, because the long road to Miami and the championship title has started.

Count me as one of those fans that gets excited when they start posting those early speeds. It’s just something special about new teams, new drivers, and car models that makes testing on the high-banked oval so special. There was the usual ton of changes in personnel when the haulers started to unload, but the biggest change this season appears to be the car that every team rolled off its hauler.

I don’t know the official term that NASCAR will use when it refers to the car of tomorrow, but one thing is for sure, every team has put plenty of time into its development making sure it is its care of today. The model wasn’t expected to be put into full time use this season, but after its introduction was met with overall positive reviews last season, the governing body decided to go full time with it in 2008. 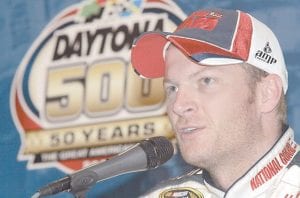 GETTING READY FOR THE SEASON – Driver Dale Earnhardt Jr. spoke with the media during pre season testing at Daytona. (AP Photo/Reinhold Matay)

The car was intended to be safer for the drivers and eliminate many of the old gray areas in the inspection process. Apparently NASCAR feels both of those goals have been achieved as telemetry from the wrecks last season showed the increased level of safety in the area that the driver occupies.

After testing last week, NASCAR must also feel confident that the old gray areas that everyone spent all winter trying to circumvent no longer exist. This was evident by the lack of NASCAR’s famous room of doom. In years past NASCAR officials have always set up an inspection room for teams during testing to show them exactly what they could expect to get by with. This was just a courtesy on NASCAR’s part, but it did give teams a heads-up on what would be permitted when they returned in February.

This season with the car of tomorrow there are no areas on the car’s body for the teams to work with. When it comes to the body, the inspection process now includes what amounts to a total body template that makes every make of car a clone of each other.

This common template now forces teams to look to the car’s handling as the area in which they might be able to gain an advantage. As you would expect during recent test sessions, teams could be found trying many different combinations of springs and shocks in an effort to gain some speed before the final laps of testing went in the books.

Of course for most organizations, information gathered from last week was being passed along to fellow teammates and crew chiefs scheduled to test this week. This sharing of information will give the week’s teams a leg up in trying to find that rare combination of speed and handling.

Sometimes Daytona winter testing seems to become routine, but this year the presence of Tony Stewart seems to put somewhat of a more serious shadow on the sessions. Stewart has been a noshow at these sessions the last couple of seasons, but with his team (Joe Gibbs Racing) switching from Chevy to Toyota this season, the two-time Cup champion wanted to get some hot laps in his new ride.

Kentucky update: It doesn’t appear Kentucky Speedway will be hosting a Sprint Cup race any time soon. The speedway’s lawsuit against NASCAR and International Speedway Corporation was thrown out of court, leaving the track with very little hope of ever securing a Sprint Cup date. The track will still host both a Nationwide Series and a Craftsman Truck Series race in 2008.