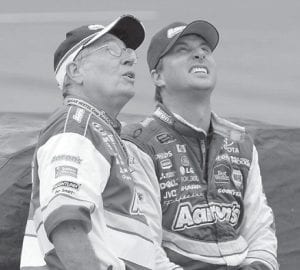 WAITING OUT THE RAIN — David Reutimann, right, and his father, Buzzie Reutimann, looked at the sky during a rain delay in the NASCAR Coca-Cola 600 auto race on Monday. Reutimann won the event when the race was called. (AP Photo)

Despite the poor economy, Lowe’s Motor Speedway was close to selling out the 140,000 grandstand tickets on Sunday for the Coca-Cola 600.

Yet there were only a few thousand fans still in their seats more than 24 hours later when David Reutimann finally was declared the anticlimactic winner after only 227 of 400 laps of the rainplagued race.

Reutimann never led a green-flag lap, winning because he decided to stay on the track when most of the field pitted during the last caution for rain. Ryan Newman also stayed out and finished second — nearly 6¬Ù hours after the green flag waved Monday afternoon.

“Obviously I’m happy with the strategy. I feel so bad for the fans out there,” Newman said. “Just to see the grandstands that were packed (Sunday) and to come back for Memorial Day knowing people couldn’t make it back.”

It was more bad luck for NASCAR, which has seen its top two races end with raindrops. Matt Kenseth won the shortened Daytona 500. And while NASCAR called that race quickly, there was a long wait before they gave up Monday. 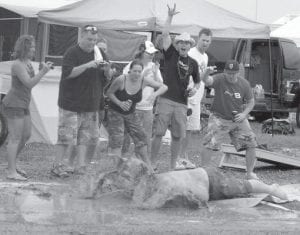 “It was in the best interest of the fans to put on a show for them,” said Robby Gordon, whose pit strategy produced a third-place finish. “Unfortunately we lost a huge part of the population with all the rain delays.”

The uninspiring finish comes ahead of Tuesday’s town hall meeting with drivers and NASCAR officials.

“It’s going to be interesting,” Newman said. “It’s the first meeting to my knowledge like this. We’ve been put in a room before and talked to. But it’s interesting and nice to have the capability to talk, a two-way street of communication.”

RED-FLAG TIFF: The red flags for rain that plagued the race allowed for drivers to get out of the cars — and argue.

Tony Stewart went up to Reutimann during a delay in what proved to be the race’s halfway point.

“Just being smart out there,” Stewart said of what he told Reutimann, in his second full-time Sprint Cup season. “We caught him and he raced us real hard. We’ve got 425 miles left in the race at that point.”

Reutimann’s team didn’t take kindly to the advice, and Stewart then got into an argument with mechanic Dwayne Bigger.

“Then he’s got a bald crew guy down there that wants to jump up there and be Billy Bad Butt,” Stewart said. “Maybe he needs to ride in there with him since they both seem to have it all figured out.”

But Reutimann said Stewart called to congratulate him after he was awarded the win.

“Tony and I are cool,” Reutimann said. “Tony Stewart is one of the guys who has helped me out the most. This was another situation where he was trying to help me.”

RIGGS OUT: Scott Riggs finished 39th in his final race in the No. 36 Toyota for lowbudget Tommy Baldwin Racing. The team announced before the green flag that Mike Skinner, Patrick Carpentier and Brian Simo will share driving duties for the rest of the season.

“I just felt like it was time to make a change to see where the race team stacked up against other teams,” said Baldwin, who is also the crew chief.