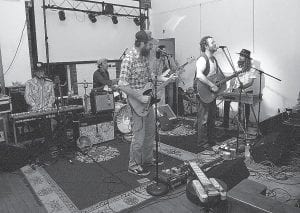 Truth & Salvage Company, a Nashvillebased band that was formed in California, performed before a nice-sized crowd at Summit City in Whitesburg on Saturday night. The band’s mixture of country and rock has brought it many fans, including the Black Crowes’ Chris Robinson, who produced one of the band’s albums. (Photo by Thomas Biggs)