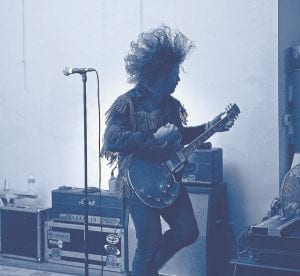 Guitarist J.D. Simo was a man in constant motion when he last performed in Whitesburg in February. Simo and the power trio he fronts, SIMO, return to Summit City this Friday night. The band Ordinary Fools opens the 8 p.m. show. (Photo by Thomas Biggs)

If you’re looking for things to do this coming weekend and see that SIMO is performing in concert in Whitesburg on Friday night, you may be wondering, “Who is SIMO and what type of music do they play?”

SIMO is a Nashville- based power trio fronted by 27-year-old guitarist-extraordinaire J.D. Simo, a native Chicagoan considered by many to be today’s best young guitarist.

“Simo plays loud and hard in the tradition of the guitar gods of the 60s and 70s, with soaring lead lines and crunching rhythms,” Walter Carter wrote in April in Nashville Arts Magazine.

Simo grew up in Chicago and quit school at age 15 to try to “make it” in the music business. He eventually landed a job as guitarist in The Don Kelly Band, which has been a fixture on the Nashville scene since 1981.

(Kelly is known for his ability to spot young musicians with talent. For a real treat, visit YouTube.com and watch J.D. Simo’s guitar work from six years ago as he performs “Ghost Riders” with The Don Kelly Band. To find it, search “The Don Kelley Band — Ghost Riders” or visit youtu.be/ S4WNO4tchUk)

“ The budding guitarist got exposed early to Sonny Boy Williamson, Howlin’ Wolf and other Chicago blues titans and de- veloped the kind of pop culture obsessions that characterize the childhoods of many future rockers,” critic Edd Hurt wrote in a 2012 article in Nashville Scene.

Simo credits his early fascination with Stax/Volt guitarist Steve Cropper, who played himself the 1980 film “The Blues Brothers,” as the main reason he started playing the guitar himself. Cropper, a Rock and Roll Hall of Famer who is also a member of Booker T. & The M.G.’s, is the guitarist on such hits as Otis Redding’s “(Sittin’ on) the Dock of the Bay” and “Soul Man” by Sam & Dave.

“I saw ‘The Blues Brothers’ and I fell in love with Steve Cropper,” Simo told Nashville Arts Magazine in April and repeated Sunday night during an interview on WMMT-FM in Whitesburg. “Then it was an obsession with music. When you start researching music, one artist leads you to forty others, which leads you to hundreds of others.”

Among the other artists Simo became seriously interested in were Elvis Presley and The Beatles. He is now a fan of all genres of music.

“There was a mini-series that debuted in the early 1990s called ‘The History of Rock and Roll,’ which was brilliantly put together,” Simo told Nashville Arts Magazine. “(It is) a five-part, two-hour-each series that documented every major facet, like Bill Haley with the birth of rock and roll through the folk boom and the British Invasion, the Motown/ Stax/girl groups/Phil Spector pop music of the 60s all the way through the New Wave thing. I would watch it obsessively and then go to the record store and buy the records they were talking about. At one point it was all about learning about Peter, Paul and Mary and Bob Dylan, and then learning about The Byrds and The Lovin’ Spoonful, and learning about Jimi Hendrix and on down the line.”

“At the core of me, I love every style of music there is, and I’ve tried to take bits and pieces of everything,” Simo continued in the interview with Nashville Arts. “But if you take me and distill it down, it actually goes back to Steve Cropper. It’s very simple and just emotional.”

Most of the songs the band SIMO perform in concert are originals, as J.D. Simo is working hard to try to shed the “child prodigy” tag with which he was labeled as a young teen showing considerable skills.

“People fawned all over me, regardless of whether I was playing something of substance or not,” Simo told Nashville Scene. “That’s the curse of being a prodigy.”