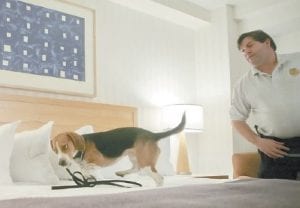 ON THE HUNT — Carl Massicott, with Advanced K9 Detectives, led his beagle dog Radar on a demonstration of how they sniff for bedbugs, during a visit to New York. Pest control company Terminex released a list last week of the 15 most bedbug-infested cities, and New York, Philadelphia and Detroit have scratched their way to the top. Terminix based the report on an analysis of call volume to the Memphis, Tenn.-based company’s 350 service centers. Insect scientists say bedbugs are appearing on a scale not seen since before World War II. (AP Photo)

A resurgence of bedbugs across the U.S. has homeowners and apartment dwellers taking desperate measures to eradicate the tenacious bloodsuckers, with some relying on dangerous outdoor pesticides and fly-by-night exterminators.

The problem has gotten so bad that the Environmental Protection Agency warned this month against the indoor use of chemicals meant for the outside. The agency also warned of an increase in pest control companies and others making “unrealistic promises of effectiveness or low cost.”

Bedbugs, infesting U.S. households on a scale unseen in more than a halfcentury, have become largely resistant to common pesticides. As a result, some homeowners and exterminators are turning to more hazardous chemicals that can harm the central nervous system, irritate the skin and eyes or even cause cancer.

Ohio authorities, struggling against widespread infestations in Cincinnati, Columbus, Dayton and other cities, are pleading with EPA to approve the indoor use of the pesticide propoxur, which the agency considers a probable carcinogen and banned for in-home use in 2007. About 25 other states are supporting Ohio’s request for an emergency exemption. 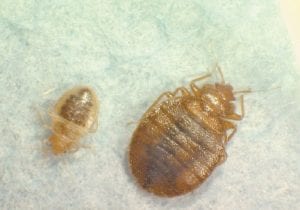 EPA rejected the request in June. An agency spokesman, Dale Kemery, said the EPA has pledged to find new, potent chemicals to kill bedbugs, which can cause itchy, red bites that can become infected if scratched.

In the meantime, authorities around the country have blamed house fires on people misusing all sorts of highly flammable garden and lawn chemicals to fight bedbugs. Experts also warn that some hardware products — bug bombs, cedar oil and other natural oils — claim to be lethal but merely cause the bugs to scatter out of sight and hide in cracks in walls and floors.

A pest control company in Newark, N.J., was accused in July of applying chemicals not approved for indoor use throughout 70 homes and apartments units, even spraying mattresses and children’s toys. No illnesses were reported.

In Cincinnati, an unlicensed applicator saturated an apartment complex in June with an agricultural pesticide typically used on golf courses. Seven tenants got sick and were treated at the hospital. The property was quarantined, and all tenants were forced to move. Authorities are pursuing criminal charges.

“When you see the anguish that bedbugs cause these people, it’s understandable why they might take things into their own hands, and some of it is very dangerous,” said Michael Potter, an entomologist at the University of Kentucky and one of the country’s leading bedbug experts.

Bedbugs, a common household pest for centuries, all but vanished in the 1940s and ‘50s with the widespread use of DDT. But DDT was banned in 1972 as too toxic to wildlife, especially birds. Since then, the bugs have developed resistance to chemicals that replaced DDT.

Also, exterminators have fewer weapons in their arsenal than they did just a few years ago because of a 1996 Clinton-era law that requires older pesticides to be re-evaluated based on more stringent health standards. The re-evaluations led to the restrictions on propoxur and other pesticides.

Though propoxur is still used in pet collars, it is banned for use in homes because of the risk of nausea, dizziness and blurred vision in children. Steven Bradbury, director of the EPA’s pesticide program, said the problem is that children crawl on the floor and put their fingers in their mouths.

Critics in the pest control industry say that the federal government is overreacting and that professional applicators can work with families to prevent children from being exposed to harmful levels of the chemical, which is more commonly used outside against roaches and crickets.

“It’s a knockout pesticide, vastly superior to anything else for bedbugs,” said Andrew Christman, president of Ohio Exterminating Co., which is on pace to treat about 3,000 bedbug infestations in 2010, up from an average of two in 2006.

Christman said other in-home pesticides aren’t as lethal as propoxur, requiring several treatments that can push extermination costs to $500 or $1,500, depending on the size of a home.

Marion Ehrich, a toxicologist at the Virginia- Maryland Regional College of Veterinary Medicine, said the EPA is showing appropriate caution. She said other scientists who have studied the bedbug problem are not eager to see propoxur released in homes.

“Propoxur is not a silver bullet, and given time, bedbugs would likely become resistant to it, too,” said Lyn Garling, an entomologist at Penn State University.

Experts say it is going to take a comprehensive public health campaign — public-service announcements, travel tips and perhaps even taxpayer-funded extermination programs for public housing — to reduce the bedbug problem.

People can get bedbugs by visiting infested homes or hotels, where the vermin hide in mattresses, pillows and curtains. The bugs are stealth hitchhikers that climb onto bags, clothing and luggage.

After the bugs were discovered this summer in a Times Square movie theater and some upscale clothing stores, New York City began a $500,000 public awareness campaign.

Last week, the pest control company Terminix listed New York, Philadelphia Detroit, and Cincinnati as the four most-infested cities, based on call volume to its 350 service centers. Ohio had three cities in the top 10.

Louisville is 13th, trailing Indianapolis and just ahead of Cleveland.

For Delores Stewart, 76, bedbugs have been a nightmare, infesting her Columbus home since last year.

“It’s awful, it’s disheartening and it’s a terrible way to live,” Stewart, 76, a retired meat factory worker who discovered the vermin crawling in her bed and her living room recliners.

Her house was treated by a reputable exterminator for the fourth time on Aug. 25. She has warned neighbors and others about the problem and doesn’t blame them for staying away.

“I feel isolated,” she said.

Darrell Spegal, a property manager in Columbus who oversees four apartment complexes, said he has spent thousands of dollars to exterminate units.

“We have to try something diff erent,” Spegal said. “I mean, look around. The bugs are winning this war.”