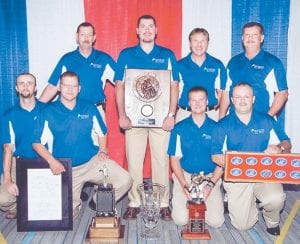 — Alpha Natural Resources’ Black Mountain White Team won the national championship in a competition of 102 mine rescue teams on Oct. 2 in Columbus, Ohio. The Black Mountain Blue Team placed sixth. Arch Coal’s Cumberland River Coal’s Blue Team finished in second place, with TECO Coal placing seventh. Four of the top seven finishers are from the southeast Kentucky area. This was the second largest field of teams in the history of the national contest. This was the 100th anniversary of the competition, which is held every other year. Ronnie Biggerstaff, trainer of the Black Mountain teams, was inducted into the National Mine Rescue Hall of Fame at the contest’s awards banquet. Pictured are (front row, left to right) Tony Lloyd of Cumberland, Team Captain Philip Muncy of Leslie County, Joe Lefevers of Middlesboro, Donnie Thomas of Evarts, (back row) Roger Gilliam of Premium, Tim Kiser of Whitesburg, David Patterson of Clintwood, Va., and Trainer Ronnie Biggerstaff of Sandlick.