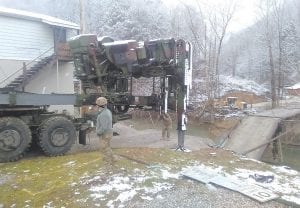 A (VERY) TEMPORARY BRIDGE – Kentucky National Guard troops set up a crane to install an emergency bridge across Rockhouse Creek at Perkins Branch on Monday. Troops pulled the bridge back out the next day after the county learned it would be required to provide 24-hour armed guards. (Photos by Sam Adams)

A bridge that appeared in a matter of hours to replace one that collapsed at Perkins Branch has disappeared just as quickly.

The Kentucky National Guard started putting up the bridge on Monday and would have completed it within an hour and a half, but insistence by the Army that Letcher County provide round-the-clock armed guards and other requirements were more than the county could bear.

The Guard was back on scene Tuesday removing the bridge, packing it back on trucks and leaving.

Letcher County Judge/Executive Jim Ward said soldiers returned to Jeremiah to remove the temporary bridge on Tuesday morning, just hours after Ward told the National Guard the county government could not afford the cost of paying armed guards to keep the bridge closed to pedestrians and all traffic except fire trucks, ambulances, and police cruisers.

Ward said that when he accepted the Kentucky National Guard’s March 9 offer to let the county use one of its pre-fabricated emergency bridges for 90 days he was not aware of all the strings attached to an agreement first presented to him late Monday afternoon, after the bridge was already in place. Included in the proposed contract was the demand that Letcher County’s government agree to keep armed guards at the bridge at all hours to keep civilians from using it, whether walking or driving. 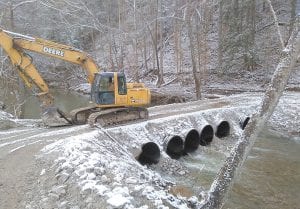 A LOW WATER BRIDGE across Rockhouse Creek will continue to carry resident of Perkins Branch in and out of their homes for now.

“Can you imagine that we’re going to post armed security to not let anybody cross that bridge 24/7?” Ward asked. “What are we going to do, shoot them?”

A portion of old Perkins Creek Road bridge, which spans Rockhouse Creek, collapsed March 7, nearly a month after it was damaged by the flooding of February 10. Ward estimates that about 25 homes are located in Perkins Branch.

The center pier of the old bridge leans to one side, and District 4 Magistrate Keith Adams said he was told by a longtime resident that it began leaning while it was being was built, probably in the 1930s. The county removed the old wooden deck and poured a concrete deck in the late 1990s or early 2000s.

After flooding last month, the pier next to KY 7 South apparently began sinking less than a day after state officials inspected it. The pier fell over into Rockhouse Creek and half of the concrete decking followed it.

Adams said when the county began building a temporary low-water bridge across the creek last week, the Army Corps of Engineers objected because of the possibility of damming the creek and causing flooding upstream. He said the Corps allowed the temporary bridge to be built, then sent the National Guard in to offer the emergency bridge spanning the creek at the same place the old bridge did.

On Monday, a machine slowly cranked the bridge beams out across the creek as soldiers added new sections to the back of the beam until it reached the desired length. It left Tuesday as quickly as it arrived.

Ward said the National Guard told him the bridge cost $2.5 million and had to be guarded around the clock because of potential tampering.