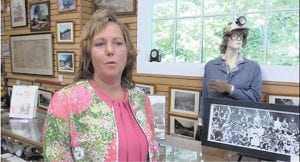 Lori Baldwin speaks with EKB-TV reporter and Mountain Eagle contributor Chris Anderson while standing beside an exhibit featuring her late mother’s accomplishments at the Zegeer Coal Museum in Jenkins.

Diana Baldwin, a former Jenkins resident who shared the distinction of being the first woman to work as an underground coal miner in America, died Saturday after a long battle with lupus.

Baldwin, 67, became the focus of nationwide attention in late 1973 after she and another woman were hired to work underground at Beth- Elkhorn Coal Corporation’s Mine 29.

Stories about Baldwin, then 25, and Anita Cherry, 39, began appearing in newspapers across the U.S. almost immediately after they were hired by Beth-Elkhorn on December 3, 1973.

“Tradition in the coalfields has it that women are bad luck underground,” the Associated Press reported three weeks after Baldwin’s hiring. “The superstition has been strong enough that most women never would think to apply for a job underground, and officials say they know of none who ever worked there. Until now.”

“Despite all the superstitions about women in the mines that they would bring cave-ins, explosions, fires and other ungodly disasters two women miners have been working here uneventfully since last December 3,” the New York Times reported in its June 3, 1974 edition. 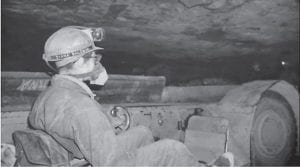 Diana Baldwin is seen in photo at right operating a coal shuttle car for Beth-Elkhorn Coal Corp. shortly after she was hired as the nation’s first female coal miner in December 1973. Baldwin died in South Carolina May 28 after a long battle with lupus. She was 67.

“It was a difficult time for being the first woman coal miner,” daughter Lori Baldwin told East Kentucky Broadcasting reporter and Mountain Eagle contributor Chris Anderson for a report that aired Tuesday night. “They accepted her eventually. She was strong willed. (But) it was a rough start

Baldwin died in South Carolina at 12:05 p.m. on Saturday, just three minutes before her mother, Lelar Baldwin of Burdine, died in Letcher County. Funeral services for the elder Mrs. Baldwin, who worked for 45 years for the Jenkins Clinic Hospital, were held Tuesday.

After working as an underground miner for two decades, Diana Baldwin became a safety inspector for the Mine Safety and Health Administration.

“She was determined and she climbed up the ladder,” Lori Baldwin said.

In addition to her daughter, sons Scott and Mark survive Baldwin. Full obituary information was not available before press time.

Lori Baldwin was only seven years old when her mother first went underground, but she can still remember some of the hardships she had to endure as one of the nation’s first female miners.

“I can remember times when my uncles had to take her to work because she was getting threats — threats of being tarred in the mines,” she said. “But that did not deter Mom from going to work in the mines. She was determined. She had three kids to support — me, Scott and Mark — and that’s what she did.”

Diana Baldwin’s career is the subject of a permanent exhibit on display at Zegeer Coal and Railroad Museum in Jenkins.

“She didn’t brag and boast about it,” Lori Baldwin said. “It was mostly me and Scott and Mark that boasted about it.”

The following story appeared in large number of national and international newspapers in late December 1973, about three weeks after Baldwin and Cherry were hired to work at Mine 29:

CANEY CREEK, Ky. Scrawled across the

equal opportunity employment poster at the No. 29 mine here is the word “bull.”

Whoever wrote it should be advised to eat his words.

Beth- Elkhorn Corp., owner of No. 29, has hired two women to work alongside men in the underground mine. And Diana Baldwin and Anita Cherry are doing just that.

Tradition in the coalfields has it that women are bad luck underground. The superstition has been strong enough that most women never would think to apply for a job underground, and officials say they know of none who ever worked there. Until now.

“We’ve always gotten lots of applications from women, for jobs as secretaries and typists,” said one Beth-Elkhorn official.

But Diana Baldwin and Anita Cherry thought they might do something besides type. They were hired as underground miners three weeks ago.

Both Anita and Diana support families and they wanted better-paying jobs.

“We heard that the civil rights thing had opened up jobs to women, so they’d have to hire us if we applied,” Anita said.

Anita, 38, worked as a licensed practical nurse for 17 years and Diana, 25, worked as a waitress and then receptionist at a medical clinic.

“We make more in two weeks here than we did all month at the hospital,” Diana said.

Both are small-boned, pretty women; neither weighs more than 120 pounds.

“We’re women — we’re not trying to be men,” Anita said. “My dad said they’d try to get rid of us, and we expected rudeness and bad language, but it hasn’t happened. It’s teamwork down here.”

They are classed as general inside labor under the United Mine Workers contract and they make $42.75 for a day’s work.

They do everything men in the same classification do: shovel coal, operate coal dust control devices and learn to operate mining machines.

“I was the first woman to operate a shuttle car with coal,” Diana said. “There was one man who stood at one end and one who stood at the other and he says, ‘Do you know you’re making history?’ That thrilled me to death. And they were so pleased for us.”