Nation’s librarians being called upon to help with healthcare law 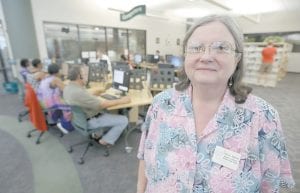 Branch librarian Nancy Agafitei poses near a computer section of the Barbara Bush Branch Library in Spring, Texas. The nation’s librarians will be recruited to help people get signed up for insurance under the health care overhaul. (AP Photo)

The nation’s librarians will be recruited to help people get signed up for insurance under President Barack Obama’s health care overhaul. Up to 17,000 U.S. libraries will be part of the effort to get information and crucial computer time to the millions of uninsured Americans who need to get coverage under the law.

The initiative starts Oct. 1, when people without health coverage will start shopping for insurance online on new websites where they can get tax credits to help pay the cost. Lowincome people will be enrolled in an expanded version of Medicaid in states that adopt it.

About 7 million people are expected to sign up for coverage in the new marketplaces next year, but the heavy emphasis on the Web-based portals puts anyone without access to a computer at a disadvantage.

Libraries equipped with public computers and Internet access already serve as a bridge across the digital divide, so it made sense to get them involved, said Julie Bataille, spokeswoman for the U.S. Centers for Medicare and Medicaid Services.

“Libraries are a tremendous resource for people in their communities,” Bataille said. “They’re already a destination many individuals go to when they’re seeking out information and understanding on a variety of issues.”

Libraries also have public spaces where meetings can be held. And they already provide health information to 28 million people a year via public access computers, according to the Institute of Museum and Library Services, a federal grant-making agency, which will coordinate the new effort with CMS. The two federal agencies also worked together during the rollout of the Medicare prescription drug benefit, experience that should help with this effort, Bataille said.

Libraries will be particularly important in conservative states that are not making much effort to promote the health law’s opportunities.

In Texas, the Dallas library system’s home page has linked to HealthCare. gov — the revamped federal website that is the hub for health law information. Embedding the widget on their sites is another way some libraries may choose to get involved, said Susan Hildreth, director of the Institute of Museum and Library Services.

Some libraries may decide to set aside some public computers for people seeking health insurance or extend time limits on computers, Hildreth said. Some may work with community health centers on educational events. Those will be local decisions with each library deciding how to participate.

The Institute of Museum and Library Services is contracting with the Online Computer Library Center to develop an online toolkit and training webinars for librarians, Hildreth said. Librarians are likely to get questions on the health law from the public.

“Frankly whether we’re prepared or not, it’s going to happen, so the best way for us to serve the public is to prepare ahead of time,” Hildreth said.

Lissa Staley, a librarian in Topeka, Kan., specializes in health information, and already is helping people figure out their insurance options.

“I talked to a woman this morning who said, ‘I’m a single mom. I make too much money to qualify for Medicaid and my employer will only let me work part time.’ I gave her my card and we’re going to sort through some of her options,” Staley said.

“It’s never just a straightforward question,” Staley said. “It’s always a life story and we help sort through the pieces of where we can help.”