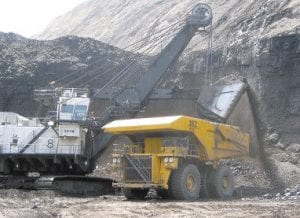 A shovel prepared to dump a load of coal into a 320-ton truck at the Black Thunder Mine in Wright, Wyo. (AP)

Insulated from the harshest effects of the housing bust — and buoyed by an abundance of energy and agriculture — five contiguous rural states have the lowest unemployment rates in the land.

Recent declines in commodity prices are being felt across Wyoming, North Dakota, South Dakota, Utah and Nebraska, with plans for natural gas and biofuel production being scaled back. However, each of these states boasted unemployment rates of 3.7 percent or lower in November, when the national rate stood at 6.7 percent.

The country’s jobless rate rose to 7.2 percent in December, the Labor Department said, but state-bystate breakdowns for December were not yet available.

Removed from major urban centers, the states with the lowest unemployment rates have kept “insulated, but not isolated” from the harshest effects of the recession by largely avoiding the turbulent housing boom and bust that plagued the nation’s coasts, said Ernie Goss, an economics professor at Creighton University in Nebraska.

They also avoided job losses that struck the financial services industry, local economists said, in part because rural bankers tended to be more cautious in their lending and exposure to risky mortgage derivatives that ended up badly for some of Wall Street’s largest investment banks.

Wyoming, the nation’s least populated state but one of the largest producers of coal and natural gas, posted the lowest jobless rate for November (3.2 percent). Another source of strength is that its largest employment sector — government — remains healthy because the budget has not been plagued by declines in real estate, income and retail tax collections.

The states with the next lowest unemployment are: North Dakota (3.3 percent), South Dakota (3.4 percent), Utah (3.7 percent) and Nebraska (3.7 percent). Michigan leads the U.S. with a 9.6 percent unemployment rate. North Dakota’s retail sector also received a lift over the past year as Canadians taking advantage of favorable exchange rates drove across the border to shop, according to Shane Goettle, the state’s commerce commissioner.

In Nebraska and the Dakotas, strong wheat, corn and soybeans prices benefit farmers as well as sellers of farm equipment and fertilizer, Sondey said.