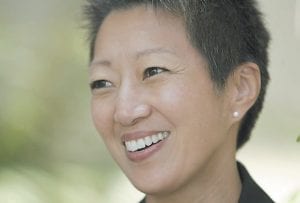 National Endowment for the Arts Chairman Jane Chu will be in Jenkins and Whitesburg next week for meetings to be held in both Letcher County towns.

National Endowment for the Arts (NEA) Chairman Jane Chu will visit Whitesburg and Jenkins on April 14. Her visit will focus on the importance of the arts in creating livable communities and contributing toward economic and community development.

Chu will begin her visit to Kentucky on April 13 in Lexington where she will meet with local NEA grantees and Kentucky Arts Council grantees and visit the North Limestone Corridor where an NEAsupported project is taking place to develop a cultural plan and public art for the neighborhood. Her visit will include a tour of the corridor with community members and artists who are taking part in the project.

On April 14, Chu will visit eastern Kentucky, beginning at the Appalachian Artisan Center in Hindman where she will learn more about its NEA-supported project to celebrate the living history and contemporary artisanship of the dulcimer. This project is part of efforts to reinvent the community as a hub for artisanship and creative activity following the downturn in the coal industry.

Next, Chu will visit Whitesburg, which is part of one of the Promise Zones designated by the U.S. Department of Housing and Urban Development. The National Endowment for the Arts is one of the federal partners on this initiative, providing technical support for communities looking to leverage their arts and cultural assets.

Chu’s visit to Whitesburg will begin with a roundtable discussion with organizations who have received Our Town and ArtPlace America funding (ArtPlace America is a collaboration of private foundations and federal agencies committed to creative placemaking) to support art-based community development projects in eastern and southeastern Kentucky. These projects include a wayfinding project to connect visitors and residents with cultural designations throughout the city of Berea; arts programming associated with the It’s Good to Be Young in the Mountains conference in Cumberland, focusing on emerging regional artists in southeast Kentucky; and the River Arts Greenway project in Hazard.

Following this discussion, Chu will tour Appalshop, a multi-disciplinary arts and education center, and learn more about its NEA-supported programs, including the Appalachian Media Institute and WMMT FM’s traditional music program. After this tour, she will join artists and representatives from Appalshop in Jenkins, the site of an NEA Our Town grant to Appalshop to support the creation of murals, a large-scale photographic installation, and a mediarich walking tour that celebrates the cultural history of Jenkins.

Among those who will talk with Chu about the Our Town project from Jenkins are Mayor Todd DePriest, Jenkins Librarian Peggy Bentley, city fundraising manager Jill Hatch, and David A. Zegeer Coal & Railroad Museum curator Lois Greer.