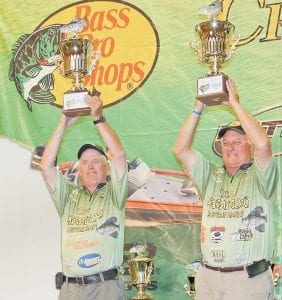 The Gary Yamamoto Custom Baits-sponsored team of Braswell and Dannenmueller began their chase for the points title back in January of this year on the Harris Chain of Lakes in central Florida. After 15 more tournaments in eight states, the team sealed the points victory in September on Kentucky Lake at Big Sandy, Tenn. The team first moved into the lead after the Grenada Lake Tournament in Mississippi in April and would remain in first place for the remainder of the tournament season.

Braswell said of the title, “It was a long season on the road running a total of 30,000 miles. We faced freezing temperatures at Reelfoot Lake in Tennessee early in the year followed by extremely hot weather by midsummer at Lake Texoma in Texas. Dead batteries, flat tires and broken equipment were just a few of the hardships we faced in our run for the title. We finished the season with 2621 points, only 68 points ahead of the second place team. This made the 2011 points race the closest in Crappie Masters trail history.”

Braswell and Dannenmueller were crowned as the 2011 “Angler Team of the Year” point’s champions at this year’s Crappie Masters Classic in Millbrook in late September.