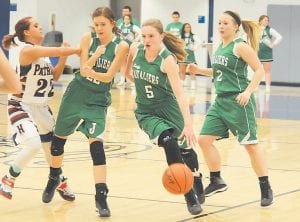 jENKINS STAR HAS ANOTHER YEAR — Whitney Creech drives the ball between teammates Reanna Elswick and Brittany Sexton as Knott Central’s Kristen Waugh (22) defended during Jenkins’ loss to the Lady Patriots. Creech, the nation’s leading scorer, is already preparing for next season. (Photo by Chris Anderson)

Jenkins High School basketball standout Whitney Creech is already focusing on next season after the Lady Cavaliers’ season came to an end last week after losing to Knott County Central in the district tournament.

“The day after she was back in the weight room,” said Ashley Addington, JHS girls’ basketball coach. “Then she goes to softball practice. She never slows down.”

Although Creech, a junior guard and forward for the Lady Cavaliers, scored 40 points and had 19 rebounds against Knott Central on February 25 at Letcher County Central High School, Addington said game statistics were the last thing on Creech’s mind after Knott Central won 58-53. Creech was upset over the loss and not advancing to the next round in the district tournament.

Creech doesn’t keep track of her point totals, but her coaches do.

“I have never met a kid who has the talent she has and is so humble,” said Addington. 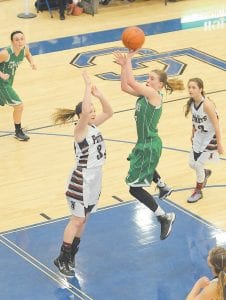 Whitney Creech, the nation’s leading scorer, goes up for two of the 40 points she scored in her team’s loss in the district tournament. (Photo by Chris Anderson)

“I think it is an honor, but I don’t focus on that,” said Creech. “I just go out there and play. I just try to win games.”

“Sometimes she does outscore the other team,” said Addington. “She scores real quietly. She works for every single point.”

As an eighth grader, Creech scored her 1,000th point for the Lady Cavaliers. She didn’t know of her accomplishment until the game was stopped and she was given the game ball.

“She had no clue why we stopped the game,” said Addington.

Creech has scored a total of 3,851 points in the seven years that she has been on the varsity squad. She garnered five points her fifth grade year; 93 in sixth grade; 375 in seventh grade; and 576 in eighth grade.

In her three years in high school, Creech has scored 2,802 points. This season alone Creech scored 1,050 points. She tallied 998 points her sophomore year and totaled 754 points her freshman year.

“She’s probably got three game balls at her house and has given the rest back,” said Addington. “Thank goodness or we wouldn’t have any basketballs.”

Creech may be her toughest critic. She always finds a way to improve, Addington said.

“ I love the game and want to be the best,” said Creech.

Last summer, Creech could often be found in the Jenkins gym working on her shot or concentrating on improving agility on defense.

“She is on the court every chance she gets,” said Addington. “If there is any way she can get to the gym to practice, she will.”

On recent snowy days, Creech walked down a hill and Addington waited in her car to take Creech to the Jenkins gym to practice.

On regular practice days, Creech stays longer than the rest.

“She stays an extra 30 minutes to an hour after practice getting her shots in,” said Addington.

Parsons said Creech consistently worked out in the school’s weight room during the summer.

“The recruiters saw from last season to this season she has really packed on muscle,” said Parsons. “It’s her hard work and dedication that makes her the great star she is.”

Creech studies plays and moves while watching college and professional basketball games on television. If she sees something she likes, she’ll practice it and add it to her repertoire like she has done with the Euro Step, which means to bypass a defender and head toward the basket.

“It looks like a fake step,” said Parsons. “She steps sideways and comes back out.”

Parsons said that Creech isn’t a ball hog like one would think because she scores a lot in games.

Parsons said she has forced every team that Jenkins has played this season to change its defense.

“Even old-school coaches will adapt their defenses to her,” he said.

Although Creech is the leader of the team, Addington said there isn’t any jealousy or animosity.

“They all work well together,” said Addington. Most of the girls on the team have played together since fifth or sixth grade. I know they can rely on her. All of the pressure is on her, but she can handle it.”

Some of her teammates worked out in the weight room with her during the summer.

“She is one of those quiet leaders who everyone wants to be around,” said Parsons.

About 80 percent of the girls’ basketball team plays on the Jenkins softball team. Creech is the starting second baseman and leads the team in homeruns.

Since fifth grade Creech decided that basketball was her favorite sport and playing basketball at the collegiate level is a dream of hers.

She has four or five offers from Division 1 schools and a couple from National Association of Intercollegiate Athletics (NAIA) schools.

“I think it is kind of rewarding to know that the hard work is paying off,” said Creech.

Parsons said Creech is a vocal leader on the court, but is quiet in the classroom.

“ Whitney is probably one of the kindest, meekest students in class,” said Parsons, who is Creech’s U.S. history teacher. “She always raises her hand and waits her turn. She’s one of my star students.”

Addington has coached Creech since she was a sixth grader and she has enjoyed watching her sharpen her skills.

“She was awesome in middle school,” said Addington. “There really wasn’t anyone who could compare to her. She just kept improving. Sometimes you can turn into a fan even when you are a coach.”

Whitney Creech is a daughter of Dwight and Janice Creech of Jenkins. She has a 20-year-old sister, Erica.