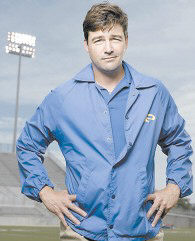 The acclaimed football-andfamily drama will return on NBC for a third year after 13 new episodes have aired on satellite-television provider DirecTV, in an unusual deal designed to spread production costs while rekindling a series whose audience until now has been as small as it is fervent.

The series will unfold weekly for DirecTV subscribers beginning Oct. 1. Then, early in 2009, it will be seen on NBC, which made the announcement last week.

Getting a jump on broadcast networks’ customary mid-May “upfront” announcements, NBC dubbed its presentation an “infront,” laying out prime-time plans (subject to change, of course) all the way through summer 2009, when reality fare will dominate.

– “My Own Worst Enemy,” a drama starring Christian Slater as a humdrum family man plagued by a Mr. Hyde streak.

– “Knight Rider,” an updating of the 1980s action-fantasy about a man and his robotic car (reintroduced earlier this season as a TV film).

– “Crusoe,” based on the classic novel.

– “The Philanthropist,” a drama about a selfish billionaire who, after a spiritual awakening, will do anything to help people in need.

– “Kings,” described as an “exploration of the timeless David vs. Goliath struggle” and starring Ian McShane (“Deadwood”).

– An as-yet-undescribed comedy spinoff from the producers of “The Office.”

This year’s freshman dramas “Journeyman” and “Bionic Woman” have been axed, as has the long-running “Scrubs,” which will finish its run in May.

“There is such a passion for this show among its viewers,” said NBC entertainment chief Ben Silverman, “and although you would hope that passion would have manifested itself in higher ratings,” the new arrangement allows NBC “to have this jewel of a show and not even need to expand its audience to succeed on a financial basis.”

Of course, hopes are high the audience will expand. (In its now-concluded second season, the show averaged just 6.2 million viewers, tying it for 117th place in network prime time.)

Premiering each episode for DirecTV’s subscriber base of 16.8 million shouldn’t hurt the series’ prospects among NBC’s much larger universe of viewers, Silverman said. And with DirecTV mounting an aggressive marketing campaign of its own, heightened public awareness of the series might carry over, drawing a larger audience for its later NBC run.

Filmed in Austin, the series depicts a small Texas town unified by its high school football team, the Dillon Panthers. Kyle Chandler heads the large ensemble cast as Coach Eric Taylor, whose never-say-die spirit seems to have served the series well since it premiered in September 2006 to ecstatic reviews but lackluster numbers. Despite its acclaim (including a Peabody award), an active fan community and continued expressions of support by NBC, the show seemed to live from week to week – until now.