New nurse, paramedic shows are on tap for fall 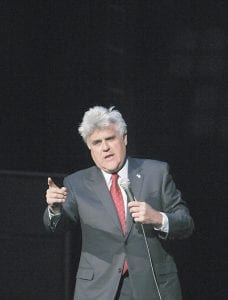 Jay Leno performed in April during a show billed as “Jay’s Comedy Stimulus Plan” at the Palace in the Detroit suburb of Auburn Hills, Mich. (AP Photo)

Jay Leno’s bid for prime-time triumph next season will be backed by nurses, paramedics and filmmaker Ron Howard.

NBC is adding four new dramas to its 2009-10 schedule, including a pair of medical shows and the Howard-produced “Parenthood,” based on the 1989 movie he directed, the network announced this week.

NBC is building its next schedule on a bold gambit, giving its daily 10 p.m. slot to “The Jay Leno Show” — the title announced May 4 — after he steps aside as “Tonight” show host this month. Conan O’Brien takes over the latenight talk show June 1.

The fourth-place network, which has struggled to launch new shows, is “doubling down on its scripted commitment,” said Ben Silverman, co-chair of NBC Entertainment and Universal Media Studios.

“We’re going to have more strength from 8 to 10 p.m. than we’ve ever had to assure that Jay has big lead-ins,” Silverman said.

The new reality shows “The Marriage Ref,” produced by Jerry Seinfeld; “Breakthrough With Tony Robbins” and “Who Do You Think You Are?” also had been announced.

The fate of other series won’t be known until NBC unveils its full schedule May 19. That includes “Medium,” ”Chuck,” ”My Name Is Earl” and the original “Law & Order.”

NBC’s announcement jumped the gun on the traditional “upfront week” in which networks present their lineups to the advertisers who make preseason ad buys.

That announcement doesn’t seem to bode well for “My Name Is Earl,” a comedy considered on the bubble, but Silverman said no decision has been made about the show.

They are “fundamentally a positive portrayal of who we are as human beings, who we are as a community, and that ultimately we strive to do the right thing,” she said in an interview.

The new shows announced this week:

— “Day One,” a saga about neighbors who must rebuild their lives and society after a mysterious catastrophe decimates the world’s infrastructure. Adam Campbell (“Date Movie”), Catherine Dent (“The Shield”) and Julie Gonzalo (“Eli Stone”) star. The drama is planned as a “big event” to follow the Winter Olympics, Silverman said.

— “100 Questions,” a comedy about a young woman (Sophie Winkleman, “Peep Show”), looking for love with the help of an online dating site and counselor (Amir Talai, “The Ex List”). It’s a traditional multicamera sitcom, a format that has dimmed in popularity in recent years, but which NBC believes in, Bromstad said.

— “Community,” a sitcom about community college misfits that brings Chevy Chase of “Saturday Night Live” fame back to TV. The cast includes Joel McHale (“The Soup”), Gillian Jacobs (“The Book of Daniel”) and Yvette Nicole Brown (“Rules of Engagement”).