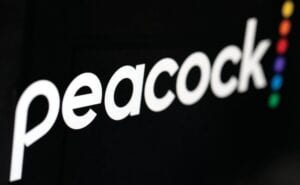 Peacock, one of the last major streaming services to launch in the U.S., was supposed to get a big boost this summer by carrying the Olympics. That was out the window once the coronavirus pandemic delayed the Games until 2021.

Hollywood’s virus-related production shutdown also slowed down the original shows available, and the service, from Comcast’s NBCUniversal, also won’t initially work with the two most popular TV-streaming gadgets, Roku or Amazon Fire — the same boat HBO Max found itself in when it started up in late May.

So now Peacock, which launches Wednesday, is hoping that blaring “free” in an ad campaign for the service will entice viewers wary of adding yet another video subscription to their stack, even in today’s stayat home world.

The service will feature hundreds of series and films, including classic NBC shows like “Parks and Rec” and, next year, “The Office,” family-favorite movies like “Shrek” and “Jurassic Park” and shows and movies acquired from other studios.

It has a free tier and a $5-a-month paid tier with more video. Stripping out ads, which run about 5 minutes an hour, costs an extra $5. The paid version has full access to original series, rather than one or two episodes, and will serve up episodes of many shows currently on TV the day after they air rather than a week later.

“Covid just obviously made this incredibly more compelling than we could have just ever imagined,” said Peacock’s head of brand and content marketing, Alexandra Shapiro. “We believe in everyone’s right to great entertainment and bringing that to the masses.”

Comcast is promoting Peacock by making the $5 version free to its cable and internet customers and launching an extended, three-month free trial with Google’s Android platforms.

The company has forecast 30 to 35 million users by 2024, a relatively tame target given that viewers have an ever-growing pile of video apps to weed through. Disney Plus, Apple TV Plus, HBO Max and short-video service Quibi have all launched over the past year.

“I heard about Peacock and I was really intrigued by it because I do like a lot of NBC content,” said Jackie Starke, a legal assistant from the Chicago suburbs who describes herself as “kind of a streaming geek” — she also subscribes to Netflix, Hulu, Amazon Prime, YouTube TV, Disney Plus and HBO Max. As a Comcast internet customer, she could get Peacock for free, so she did. “I just wasn’t impressed. A lot of the content is duplication of what you can find elsewhere,” she said.

Disney Plus has already racked up 54.5 million customers at last count; HBO Max, one of the most expensive services at $15 a month, expects 50 million in the U.S. by 2025 and up to 90 million worldwide. Netflix, the old guard of streaming at this point, has more than 180 million worldwide.