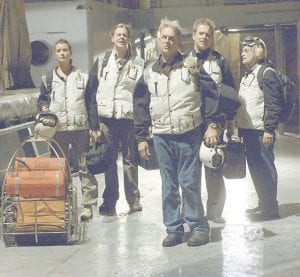 Scan a list of TV’s top 10 programs and you’d expect to find the durably popular “CSI: Crime Scene Investigation.” But now it’s got unlikely company from another series with an alphabetsoup title: “NCIS.”

CBS’ drama about Navy crimebusters has managed the neat trick of climbing in the ratings in its fifth season, even as many new shows and some veteran ones are finding it tough this fall to woo viewers.

“NCIS” also endured a behind the-scenes drama last season, a clash between star Mark Harmon and series creator Don Bellisario. That was followed by a shakeup in which the daily production duties handled by Bellisario passed to others.

If the changeover has been difficult it can’t be gleaned from talking to Harmon or, especially, new executive producers Charles Floyd Johnson and Shane Brennan, who sound enthusiastic about their efforts to keep the veteran series fresh. (Its 100th episode aired Oct. 30).)

Then there’s those stellar ratings. Last season, it averaged 14.5 million weekly viewers to rank 17th among all shows. For the week of Oct. 15, it drew more than 17.5 million viewers to gain the No. 6 position. It’s just behind “Grey’s Anatomy,” proving that sexy young things have yet to achieve a TV monopoly.

“‘NCIS’ is the little show that could, a true hit that does not get the attention it deserves,” said Marc Berman, analyst for Media Week Online.

The series even holds its audience against the January-to- May gale force of Fox’s top-rated “American Idol,” a rare achievement.

“NCIS” has an international following as well, in Europe, Australia and elsewhere.

In an interview with The Associated Press, Harmon sounded pleased but pragmatic about being part of a hit with legs. He recalled the studio celebration held during the filming of the centurymark episode and the thicket of media and cameras that covered it.

“When I create a show, I don’t tell it all right away. And I don’t do serial shows. I do mini (story) arcs within a series, try to make very interesting characters that are different from one another and with a lot of humor,” he said. “That attracts an audience.”

Now “NCIS” duty falls to Johnson and Brennan (Bellisario retains the title of executive producer as well). Their job, they say, is to build carefully on a “solid template.”

“When considering where to take the show, we realized there are unanswered questions about Gibbs and Abby and McGee and Ducky,” Johnson said, naming the characters played by Harmon and co-stars Pauley Perrette, Sean Murray and David McCallum.

“We decided it’s a great time to answer those questions, and we’re turning snippets into story arcs,” he said. Those story lines inevitably carry more emotional impact – as well as a certain risk.

“Not all bets are off,” said Johnson, who’s worked on the show from the start. “The trick is to maintain the show that the audience knows and loves, a procedural but with a strong core of humor and character interplay.”

Added Brennan: “We’re lifting the veil; not pulling it off, but giving them (viewers) a little peek.”

“We’re all part of favoring growth … they (Brennan and Johnson) have pushed that forward this year and the audience has responded,” he said. “The actors have, too, but sometimes the actors respond and the audience doesn’t.”

There are other changes Harmon favors, particularly a less onerous filming schedule.

“We work hard to keep this show what it is. That we’re working 12 hours a day versus 16 hours doesn’t mean we’re working less hard. There’s a pride that drives us,” Harmon said.

Bellisario has established shows before and then moved on to start yet another. This time, he decided to take a year or so off from writing – he broke his vow this week, after five months – and then turn in a new direction. Or directions.