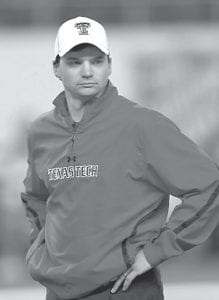 Neal Brown plans to bring the ‘Air Raid’ offense to Kentucky. He said it won’t take long to install the up-tempo, passing attack, that it can be done quickly.

The Wildcats new offensive coordinator said Tuesday he will employ the offense that helped Texas Tech’s offense rank in the top 15 nationally during his three seasons there.

Brown, hired December 10, learned the nuts-and-bolts of the offense playing wide receiver at Kentucky under coach Hal Mumme from 1998-2000. He adopted the philosophy as a coach and helped Troy’s offense thrive with it for two years before going to the Red Raiders.

The Louisville native faces a big challenge with the Wildcats, whose offense ranked next to last in the Southeastern Conference this past season at 315 yards per game.

Still, Brown is confident Kentucky will turn things around.

“It’s been done,” said the 32-year-old, who will also coach Kentucky’s quarterbacks. “This program’s had a couple of down years, but it also went through some of its strongest periods with five or six bowls games in a row. Here’s the deal, the SEC’s a tough conference, there’s no question. I’m coming from a conference that’s not chopped liver; week in and week out it’s tough and if you look at the rankings that backs that up.

“But the opportunity to come home with these people, with the fan support that Kentucky’s going to have and turn this thing around, it will be done.”

When Mark Stoops was introduced as Kentucky’s head coach on Dec. 2 he promised that fans would see an offense that they’re “going to enjoy.” Eight days later he followed up on that promise by hiring Brown, who directed one of the nation’s most prolific outfits at Texas Tech.

The Red Raiders (7-5) are headed to the Meineke Car Care Bowl and coming off a regular season in which they ranked second in passing offense (361.9 yards) and 12th in total offense at 501.4 per game. Texas Tech’s scoring average of 37.8 points per game ranked 16th.

Troy enjoyed similar success under Brown, especially in his second season with the Trojans. In 2009 they improved from 27th to third in total offense and from 33rd to fourth in passing.

Brown believes Kentucky is capable of the same success and said it might “two or three days” to install the system this spring. As for which quarterback will run the system, he has already told sophomore Maxwell Smith and freshmen Jalen Whitlow and Patrick Towles that there will be an open competition in the spring and fall for the starting job with reps evenly split between the trio.

“Let’s get better. That is simple,” Brown said. “I said, ‘Hey, I am not going to spend a whole lot of time watching what you did before. There are going to be some fundamental things that are nonnegotiable that we are going to do. Y’all are going to start on the same level playing field, best man wins.’

“I don’t have any ties to any of the three of them. I am going to coach them like they are my own and like I recruited them and the whole deal. The best man is going to play.”

Smith began the season as Kentucky’s starter in a spread offense and passed for 975 yards, eight touchdowns and four interceptions before sustaining a season-ending left ankle injury against South Carolina. Whitlow and Towles shared duties for the rest of the season with senior Morgan Newton also seeing time under center.

None of them could lift the Wildcats (2-10), whose 176.2-yard passing average ranked 12th in the 14-team conference. But Brown is heartened by the fact that Smith, Whitlow and Towles all gained experience in a tough conference that has a chance to win its seventh consecutive BCS national championship.

“It’s a good problem,” Brown said of having that many quarterbacks to choose from. “And it’s really not a problem, it’s a situation. We’ve got three guys who can play quarterback in the Southeastern Conference.”

Brown just returned from recruiting and said he has not had time to observe Kentucky’s receivers, none of whom had 500 yards this season. However, he said he’s encouraged by an offensive line that returns Darrian Miller, Zach West and Kevin Mitchell, and said the running game will be a big part of the Wildcats’ offense as well.

Stoops still must hire a wide receivers coach, something Brown said will be done soon. He hopes that turning around the Wildcats’ offense can come just as quickly.

“This system has been successful everywhere we have been,” Brown said. “We have been able to turn some teams that weren’t very good on offense around quickly. How quickly it can be done, I don’t know. It will be done, but it is going to take some work though for sure.”