NEAR SCENE OF CRIME 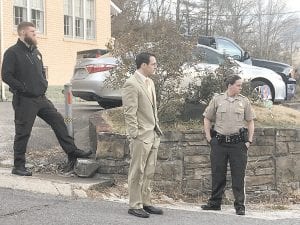 — Murder suspect James Huffman IV was guarded by Letcher County Sheriff ’s Deputies as he watched jurors examine the scene of the January 1, 2014 stabbing death of Michael Hogg of Kingscreek. Huffman, one of two men charged with murder in the downtown Whitesburg stabbing, is standing near a rock wall on Back Street, where eyewitnesses say Huffman hid the knife he used to kill Hogg and injure two others. Testimony in the case is now in its second week. (Photo by Ben Gish)