Need a liver? You live where? 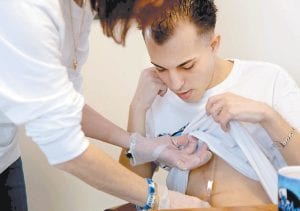 Matthew Rosiello, 21, is aided by his mother Randy, who’s adjusting his surgically placed catheter, at their home in New York. Matthew is waiting for a liver transplant. (AP Photo)

Doctors dropped another bomb soon after telling Matthew Rosiello it was time for a liver transplant: The 21-year-old isn’t likely to get one any time soon in his home state of New York. Consider traveling to Ohio, they advised, where the wait’s a lot shorter.

Where you live plays a big role in how sick you are, and how long you wait, before getting a scarce liver transplant — if you survive long enough. Now the network that runs the U.S. organ transplant system is exploring steps to ease some of the disparities. Critics who want more nationwide sharing of donated livers fear any changes won’t help enough.

“I’ll go anywhere for my son. This is his life,” says Matthew’s mother, Randy Rosiello of New York City, who has begun researching waiting lists from Ohio to North Carolina as the family debates its next step.

But she doesn’t think her son should have to leave his doctors at New York’s Mount Sinai Medical Center, or undergo the stress of travel. Plus, she worries, “if I have to go, I’m putting my family into financial ruin.”

The nation has a severe shortage of donated livers. More than 16,000 people are awaiting a liver transplant, and just 6,300 a year get one. More than 1,400 others die waiting each year.

Since 2002, the sickest patients have been ranked atop waiting lists to receive a liver from a deceased donor. They’re given a so-called MELD score, based on laboratory tests, that predicts their risk of death. Rising scores move them up on the waiting list. The change by all accounts has greatly improved the system, which once was based instead on time spent waiting.

Here’s the lingering trouble: Patients with liver failure and would-be donors are not distributed evenly around the country. And the nation is divided into 11 transplant regions that have wide variations in patients and available organs, between regions and within them.

Patients can shop around for shorter lines, even get on more than one list, if they have the means to get to a far-away hospital within hours of a liver becoming available. For instance, Apple CEO Steve Jobs’ 2009 liver transplant was in Tennessee, where the wait was much shorter than back home in California.

But Mount Sinai liver transplant chief Dr. Sander Florman says that system isn’t fair to those who can’t afford to maximize their chances.

For patients like Matthew Rosiello, the news that New Yorkers wait longer for a liver complicates already agonizing treatment choices.

When he was a baby, Rosiello had complex liver surgery for a rare birth defect, biliary atresia, and more surgery a few years ago that postponed a transplant. But now repeated liver infections and other complications have put him in the hospital three times in about a month, require IV care and forced him to quit college. Still, his MELD score is low, something doctors warn could change rapidly — but that also means he should consider a place with a shorter wait.

How big are the differences? The United Network for Organ Sharing says that in three regions stretching from Ohio down through Tennessee and on to Florida, adults receiving new livers in the past year had median MELD scores of 23 to 24. But in the New York and western Vermont region, liver recipients were far sicker, with a median score of 32. Only the region that includes California fared worse, with 37.

Within regions, rates of people who die on the waiting list or become too sick to transplant range from fewer than 10 percent to more than 25 percent each year.

So UNOS’ liver committee is seeking feedback from transplant centers about options to improve, in hopes of proposing changes later this year.

Topping the list: If a liver isn’t a good match to the sickest patients within one region — as measured by a MELD of 15 or more — offer it nationwide before giving it to a less sick local patient.

New York transplant centers suggest splitting the country into four or five “super regions” where the sickest patients in the entire zone would get first dibs. No, livers don’t last outside the body as long as kidneys that often are shipped long distances. But Florman says his hospital successfully flies in livers from Florida that hospitals there turn down as less-than-optimal — because, say, the donor was elderly — meaning better organs should have no problem.

And often less-than-optimal organs go to waste, because of restrictions on when hospitals can take a chance with them, adds Dr. Thomas Fishbein of Georgetown University Hospital in Washington, D.C., another hard-hit area.

Bigger moves would encounter more resistance, cautions Dr. Kenneth Washburn of the University of Texas Health Science Center, who chairs UNOS’ liver committee and views modest change as an important first step. A proposal for regional sharing that skipped the local transplant center prompted “a lightning rod” of objections from hospitals that stood to lose organs, he says.

Indeed, centers with shorter waits say they do a good job of encouraging organ donations and other regions should try to improve.

“If you equate it to hunger, people try to figure out how to come up with more food, not which kid gets the sandwich,” says Dr. Joseph Tector, transplant chief at Indiana University Health.

While short-term relief is needed, more organ donation is the long-term answer, agrees Georgetown’s Fishbein: “It’s only because we’re so short of livers that we fight over the livers that are there.”