By MORGAN WATKINS
The Courier-Journal 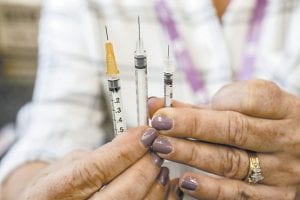 Sally Brunner, RN, shows the different size syringes available to intravenous drug users in an RV in the parking lot at the Franklin County Health Department in Frankfort. Since state lawmakers decided in March 2015 to allow needle exchanges in Kentucky, 21 have been established. (Michael Clevenger/The Courier-Journal via AP)

One woman relied on old needles used by her friend’s diabetic husband. Another settled for whatever syringes she could find.

But for the first time since they started using drugs several years ago, both women have access to fresh syringes. They are getting them through a needle exchange in Frankfort.

“ If you can have a new one every time, why wouldn’t you?” asked the younger of the two women, who both spoke to the Courier Journal of Louisville on condition of anonymity for fear of being stigmatized or getting fired. “I think it’s awesome that they’re doing this.

“It’s going to happen either way, you know what I mean?” she explained. “They can actually help instead of ignoring the problem.”

Since state lawmakers decided in March 2015 to allow needle exchanges in Kentucky, 21 have been established, some in cities like Bowling Green, others in rural communities like Williamstown.

Health officials say the exchanges are needed to help stem the spread of Hepatitis C and HIV in Kentucky, which is particularly vulnerable to both. The U.S. Centers for Disease Control and Prevention recently identified 220 counties that are especially vulnerable to the rapid spread of both among people who inject drugs, and 54 were in the Bluegrass State.

Greg Lee, director of the state’s HIV/AIDS continuing education program, said Hepatitis C, which can be spread by drug users sharing needles, can have ripple effects that impact other people who need medical care. For example, people with Hepatitis C can’t donate blood.

Meanwhile, some state lawmakers think new restrictions should be enacted to ensure the exchanges give out only as many needles as they receive, but the people running the programs say that kind of mandate could hurt their ability to combat the spread of disease.

For a while, it seemed only urban areas like Louisville and Lexington would welcome needle exchanges, Lee said. But rural counties warmed up to them last summer, which is also when Frankfort’s exchange opened.

“It seems to be kind of mushrooming,” he said, especially over the last 10 months.

To set up a needle exchange in Kentucky, the local board of health and the governing bodies for the county and city in which the program will be located must approve.

These initiatives are a “no-brainer” for many health departments, but securing support from city and county officials takes longer, Lee said. Community buy-in is vital to the initiative’s long-term success, but it takes time, he said.

Beyond the needle exchanges that have already opened in Kentucky, another seven counties — Kenton, Boyle, Garrard, Powell, Clay, Nelson and Owsley — have secured all the necessary approvals, although they haven’t launched their own programs yet, Lee said. And some local boards of health have backed an exchange but haven’t won the support of county and city officials yet.

Then there are communities like Hopkinsville, where Mayor Carter Hendricks said needle exchanges haven’t even been discussed.

“The need has not yet really surfaced,” he said. “The drug that’s really been the greatest problem in our area for the past two to three years has been meth.”

Needle exchanges haven’t gained much traction in western Kentucky, where meth reigns, Lee said. But the state is seeing opioid use grow slowly there.

Some health departments are in no rush to put the issue to a vote. The Bullitt County Health Department, for example, is still in the “education and awareness phase,” public health director Andrea Renfrow said.

The health department’s job is to educate people, she said. And research shows that needle exchanges don’t increase drug activity but do help keep diseases from spreading.

Despite the research Renfrow and other health officials cite, many communities remain wary of needle exchanges, which have existed since the 1980s but are new to the commonwealth.

The Boone County Fiscal Court considered the idea last year, but none of its members “felt comfortable” making a motion to proceed with an exchange, Commissioner Charlie Walton said.

Yet northern Kentucky, as well as eastern Kentucky, have a greater need for these programs right now than other parts of the state do because they have counties that are at greater risk for an HIV outbreak like the one that rocked Scott County, Ind., last year, Lee said.

“This is just a tool that we need to do our jobs in controlling diseases,” she said of needle exchanges. “That’s all it is, and if we can help people get into treatment and get on a better path in life, all the better for everyone.”

Grant County launched a needle exchange last spring and all the necessary approvals for one in Kenton County have been secured, Lee said. But elected officials in Kenton want an exchange in Campbell or Boone County to be fully authorized before opening their own.

Needle exchanges are supposed to stymie the spread of diseases like HIV and Hepatitis C by reducing people’s reliance on sharing syringes.

But some state lawmakers, as well as Gov. Matt Bevin’s administration, have expressed support for a controversial mandate that might make it difficult for health departments to eradicate needle sharing.

This “one-for-one” mandate would require needle exchanges to receive one dirty syringe for every clean one they dole out.

Republican state Sen. John Schickel, who represents Boone County, opposes needle exchanges but said he doubts they could be eliminated now. He hopes a one-for-one requirement is approved, at least.

“ To have the government provide someone who is taking illegal drugs the means to do it is wrong,” he said. “It sends a mixed message, especially to our young people.”

Now that the Republicans control Kentucky’s legislature and its executive branch, a one-for one requirement may be reconsidered during this year’s legislative session. The Bevin administration already requires needle exchanges funded through state grants to stick to a one to one ratio.

Bevin believes a “true one-for-one needle exchange will get us closer to the goal of reducing the number of needles on the street,” an emailed statement from the Governor’s Office said.

But health officials say a one-for-one requirement could hamper the effectiveness of the exchanges, where some people who inject drugs are still afraid to go. “ You’re not really providing enough clean syringes to keep sharing from happening,” Lee said.

A one-to-one ratio is a good goal but not good policy, said Wayne Crabtree, who oversees the Louisville Metro Department of Public Health and Wellness’s needle exchange operation.

Building trust the people who would be helped by needle exchanges takes time.

“It’s very humiliating and humbling to come here,” said a woman wearing bright tights who frequents the exchange in Frankfort. She said she has tried to get friends to visit the exchange, which doesn’t ask for names, “but they’re afraid to be marked.”

For her, Frankfort’s program has been a godsend. “It does no good to have people reusing needles over and over again,” she said. “You have to make it as safe as you can.”

And though she’s repeatedly said “no” when asked if she’s interested in substance abuse treatment (which she’s tried before), she said it’s a question the staff needs to keep asking.

For most people who go to needle exchanges, the employees they meet there are the only sober people in their lives, Crabtree said. The stigma associated with addiction keeps people from treatment, but forging those personal connections can have an impact. Someone who uses a needle exchange is five times as likely to enter treatment as someone who doesn’t.

Last fall, a middle-aged couple visited Frankfort’s exchange for the first time. Their friends were “too scared” to come, said the woman, whose copper hair was pulled back in a ponytail.

“Tell your friends: No IDs, no problem,” an employee told them. They promised to spread the word.

The couple said they appreciated that the staff didn’t treat them like junkies. Medical problems propelled them toward pain pills, but they planned to be off them soon, the woman promised, for their son’s sake as well as their own.

“We’re getting ready to get into a program to get some help. I’ve just seen too many people die,” she said. “I’m going to do it. I’m not going to give up.”