Neighboring Virginia most vain when it comes to license plates 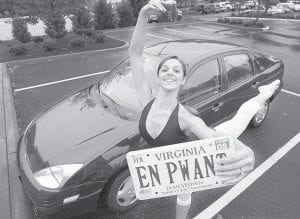 URSOVAIN – Brittany Diaz did a pointe as she held her personalized license plate, “EN PWANT” French for pointe, in front of her car in Richmond, Va., recently. A nationwide survey shows Virginia drivers are the most vain, with a higher percentage of personalized, or vanity, license plates than any other state, the District of Columbia or even Canada. (AP Photo/Steve Helber)

You, too, New Hampshire, Illinois, Nevada and Montana.

A state-by-state survey of the popularity of vanity license plates has found that car and truck owners in Virginia are the vainest of them all.

Out of the 9.3 million personalized plates on the roads of America, about one in 10 are in Virginia, according to rankings provided to The Associated Press by the American Association of Motor Vehicle Administrators.

That’s 16 percent of the plates issued by Virginia (which many people living in neighboring Letcher County have referred to for years as “the land of personalized license plates”). New Hampshire came in second with nearly 14 percent. Illinois had about 13.4 percent, but that amounted to nearly 1.3 million plates, the most of any state.

Texas had the fewest, with only about a half percent of drivers personalizing their plates.

Stefan Lonce calls it “minimalist poetry in motion” – telling a story in eight or fewer characters.

Lonce – author of the upcoming book “LCNS2ROM-License to Roam: Vanity Plates and the Stories they Tell” – worked with AAMVA to survey vehicle licensing agencies in each state.

“I think a lot of people have stories to tell and they really want pieces of those stories out there,” said Lonce, who admits he initially thought it was silly for people to spend extra money to personalize their license plates.

Ion Bogdan Vasi, an assistant sociology professor at Columbia University, calls people who personalize their plates “the narcissistic materialist poets of the iGeneration.”

“Most people buy personalized plates simply because they want to tell the world they are special,” Vasi said in an e-mail. “They wrote an ode to themselves and they want to share it with everybody on the highway.”

Some plates are cryptic, like Brittany Diaz’ EN PWANT. It’s a reminder of the summer when she studied ballet in New York and her French teacher pronounced the “en pointe” style of dance as “en pwant.”

“Most ballerinas get it, and those who don’t dance I figured would be entertained because pwant is just a funny thing to say,” said Diaz, 17, of Midlothian.

Others are personal, like those of Ally and Rudy Masry of Briarcliff Manor, N.Y. She donated a kidney to her husband in 2003, so her car has the tag DONOR and his reads DONEE.

Some offer quirky takes on professions, like EYEMAN and 2THDR. BYTE1 reflects the computer science degree held by Vonn Campbell of Greenville, S.C., but he also chose it “to provide a somewhat abrasive message to those individuals who follow too closely.”

But why does Virginia have so many personalized plates?

“It’s only $10. You can do it online with little effort. You can get a new one every month if you wanted to,” said Benjamin Mace, a Virginia Beach Web designer who started CoolPl8z.com, where people post pictures of their vanity plates.

However, some other states are just as cheap. And Illinois has the largest total even though it charges $78 per year.