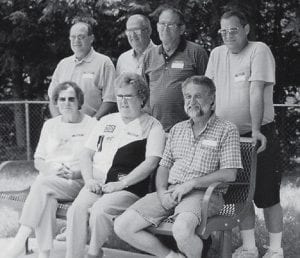 It seems as though I’m in a changing season lull lately. I just can’t get in the mood to sit down and write a column.

L.C. Adams made his molasses the next day and he and Ellis had enough cane left to have a third stir-off together a few days later.

It was a lot of work and quite a few neighbors helped out, either by cooking lunch for the group or by skimming or by stripping and getting the juice out of the cane.

Our area was saddened to learn that H.B. Caudill of Isom, recently passed away due to a heart attack. He was well known and liked by those who purchased gas at his and Shirley’s gas station at Isom. We will miss him and our prayers go out to his large family of sisters and brothers, and his wife, Shirley, and his children.

Doreen Blair and the late Bernard Blair’s daughter, Melanie, also died recently. Melanie was a sweet young lady, also loved by many in the area. She had lots of kinfolk, friends and church family who were saddened by her death as was evident by the large crowd that attended her funeral service. She was laid to rest near her home “between the bridges” at Letcher, in the Whitaker Cemetery.

We hope Roy Dixon of Jeremiah, is feeling better. He had a spell with his heart and was taken to the hospital Sunday before last. It was the memorial service of deceased members at the Dixon Memorial Church that day, and the church had him in their prayers. We hope he is much improved by now and know he missed being at his home church.

Mamie Engle also spent a few days in the hospital recently. She was flown to Lexington by helicopter to have her heart checked out. After a few days she came home. Her daughter, Wilma Jean, stayed with her and now her other daughter, Bobbie, is with her for awhile. Mamie is feeling some stronger and doing pretty well. Her granddaughters are also helping out.

Bascom McIntyre recently had to spend some time in the hospital but is home now and doing better. His daughter, Hester, has been in visiting.

Hagel Campbell, Jr. Lusk, Bill Adams, and Tammy Slone also were having health problems and had been in the hospital.

A baby shower was given for Mellissa Parks and her husband, who have a new baby boy. Many of the sisters of the Blair Branch Church, as well as many family and friends, came out to enjoy the shower and be together with Mellissa and the baby. He really has a headful of dark hair and is very cute.

The children of the late Dee and Ethel Smith got together last Friday evening for a cookout at Tommy Harris’s cabin at Drew Branch. They had a good visit and dinner with family and friends in attendance.

Our daughter, Jessie Banks, came home for a visit recently and to check on her grandmother, Opal Banks, who has been having some medical tests run lately.

Jessie spent last week in Nashville, Tenn., at a Cracker Barrel restaurant convention. We were pleased to learn that she was named Retail Manager of the Year for her district. She was managing the Berea Cracker Barrel gift shop when she won, but is now at the Corbin store and is living in London.

Opal’s tests came back good and her brother, Bill Adams, who had been in Lexington having tests on his heart, also checked out well.

Their sister, Hazel Adams, celebrated her 88th birthday on Sept. 30. Ellis and Ila Adams stopped by Hazel’s to wish her a happy birthday. Ila made her a fresh batch of gingerbread and Hazel really enjoyed it.

A memorial service was held at the Hampton Cemetery behind Letcher School on Sunday evening. Many came out in remembrance of their loved ones, who are laid to rest in the old graveyard.

Here is a rundown of a few yard sales coming up:

A six-family sale will be held on Saturday, Oct. 6, beginning at 9 a.m. at Burton Hill at Letcher at the home of Becky and Aaron Blair. Homemade goodies will also be sold.

Also, on Saturday, Oct. 6, there will be a community yard sale in Blackey beginning at 8 a.m.

On Friday and Saturday, Oct. 5 and 6, there will be an eightfamily yard sale at the home of Greg and Glenna Pridemore at Isom.

Chuck Halcomb of Letcher, joined the Mount Olivet Church last Sunday at the Association building and will be baptized this Sunday. It will take place at the Blair Branch Church about 12 to 12:15 p.m. Everyone is very happy for him.

Don’t forget this Saturday, Oct. 6, will be the reunion of the George M. and Sally Banks Adams descendants. It will be held at the Stuart Robinson School Campus at Letcher and all are welcome.

This news from Elva Marshall:

“On Sept. 22, the family of Hiram and Ella (Caudill) Pridemore met together for a family reunion at the Union Free Will Baptist Church fellowship hall in Wheelersburg, Ohio. All seven of Hiram and Ella’s children were able to attend. It was our mother’s wish that her children would always stay close and care for each other. The yearly reunion is one of the ways by which we do that.

“While waiting for everyone to arrive, we visited with the early arrivals and gave a tour of our church to those who had not been here before. We have a church member artist who has done some beautiful murals throughout the church as well as the backdrop for our baptistery. These were of particular interest to our visitors.

“A noon we began preparation to have lunch, the food was all spread out and thanks for our food was given by Virgil “Roy” Smith. Everyone enjoyed the food and most overate. Groanings about being stuffed were heard all afternoon. Next began play time. Many of the family like to play Mexican Train Dominoes and that’s what many of the adults did while the children were playing basketball, volleyball and corn hole in the activity building. Some just visited and reminisced about times gone by. Everyone seemed to be busy and enjoying themselves.

“We had purchased a Bible with Pridemore Reunion 2007 printed on the cover to be given out as a door prize to one lucky family member, but since our niece, Traci Madden, was unable to attend because of illness, it was decided that we would all sign it and send it to her with our love and prayers.

“Those in attendance were Virgil and Billie (Pridemore) Smith with son Roy Kenon and grandson Zack; Don and Corene Pridemore with daughters Bonita Adams and Delana and Bob Banks; Bill and Elva (Pridemore) Marshall with sons Barry and Randy and Doreena, with their children Nathan and Traci Marshall, their children Adi Jo and Kialan, Natalie Marshall and daughter Shaylee, Kevin and Jill Marshall with son Eli; Lee and Wilma Pridemore with their sons, Gary and Becky, their daughter Kelly Jordan with her daughter Hope; Greg and Glenna Pridemore, their son Justin; Ford and Libby Pridemore; Lenville and Cathy Pridemore, their son Chad; and Darrell and Vicki Pridemore with their son Richie and Christi Pridemore and children Tayte and Paige. Over the years we have acquired other family members by adoption who were in attendance also. They are Rodney and Gerri Ison, Ronald and Susan Ison, Gillis and Marie Reedy and Lloyd and Nannie Mason. We are glad to call them family. We were also pleased to have Vicki’s mother, Coleen Cooper, son Steven and wife Lori visit with us. Our church pastor, Chris Oiler, dropped by to say hello and to eat shucky beans and prune cake. It was a wonderful day and we thank God that we were able to all be together once again.”