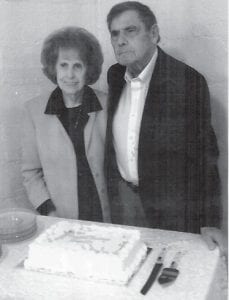 Donald “Sonny” and Norma Ann Addington Nelson of Neon, celebrated their 60th wedding anniversary on Wednesday, May 18, at the First Baptist Church Fellowship Hall in Jenkins. This was a surprise celebration given by the church.

Many of their friends met with them to celebrate their anniversary with an elegant and delicious dinner prepared by Ellen Compton and served by her husband, Ronnie Compton.

Following the dinner, the Nelsons reminisced about several events during their many years together. They answered questions that were asked by friends concerning the longevity and success of their marriage. They also told a few humorous stories that were entertaining.

Sonny and Norma Nelson were married at Fleming on May 26, 1956 by a former pastor, John R. Isaacs. They spent their honeymoon at Niagara Falls in New York and in Canada.