Neon art is 1st of 4 Diabetes is awful, says one who knows 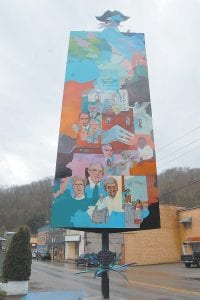 FIRST OF FOUR COUNTY-WIDE — Artist Doug Adams said Fleming-Neon residents gave him ideas on what to include in the artwork that has been erected in the town. (Eagle photo)

Artwork by Letcher County artist Doug Adams is in place in downtown Fleming-Neon.

The work, commissioned by Letcher County Tourism and paid for through the Letcher Fiscal Court, consists of three panels depicting Neon Days, Fourth of July and Christmas. Prominent citizens of the community and buildings can be found on each panel. A pirate, the mascot of the old Fleming-Neon High School, tops the sculpture.

Adams said local citizens gave input on the project, which took about eight months to complete.

The piece is the first in a series of four that Adams will create. Others will be placed in Isom, Jenkins and Blackey.

Time does, indeed, really fly after you pass 60 and then it just keeps getting faster. The reason I know the truth of this is because it does not seem possible that an entire year could have slipped by since I last implored readers of this column to assist my grandson, Tyler Kane “TKO” Ochs, and me to raise some dollars to help fight diabetes.

For the last three years Tyler, his family and friends have participated in the annual Step Out Walk to Stop Diabetes that is held each spring at Keeneland Racetrack in Lexington. It is a big event that draws over 2,000 participants from central and eastern Kentucky to join the battle to fight and call attention to this terrible, always debilitating, and far-too-frequently, deadly, disease. This year the walk will take place on the morning of May 30.

Diabetes is the seventh most listed on death certifi- cates cause of death in our country. However, it is most likely the root cause of a host of other killers such as heart disease, strokes, kidney failure, liver disease, blood poisoning and hemorrhages, to name a few, that are listed as the cause of death without mentioning diabetes.

For example, even though neither of them have done me in so far, I have had two strokes that the doctors tell me were probably related to my diabetes. The jury is still out on whether my intimate association with Mr. Parkinson was brought on by erratic blood sugar imbalances. The point is, that if either of them had proven to be fatal, my diabetes would not have been listed as a cause of death even though it would, most likely, have been the root cause.

Thanks to diabetes, I have just completed one eye surgery and have three to go. Diabetes is one of, if not the most absolute, leading causes of blindness and is, by far, the leading cause of lower extremity amputations among adults. I could go on and on, but I think you get the picture.

The truth of the matter is that, other than visual impairment, I am not much bothered with the disease on a daily basis as long as I take my metformin, orally, twice a day, try to eat responsibly and get as much exercise as possible.

Our son, Christopher, is not so lucky. He has to have two daily injections of insulin.

Our six-year-old grandson, Tyler, has to wear an insulin pump, and monitor every bite of food or drink, other than water, that he ingests. Tyler can and does count every carbohydrate that goes into his mouth and does up to half a dozen blood tests every day. The insulin pump is strapped to his lower abdomen and attached to a needle injected into his belly and he has to wear it 24/7. The needle location has to be changed every three days. While he has not yet mastered the science of changing the needle by himself, he has been doing his own blood tests and carb counts since he was age three.

The pump is far less painful than having three or more insulin shots ever day and the dosage regulation is also much more precise. But the thing that most amazes me is that TKO does not allow the contraption or the disease to slow him down or prevent him from doing anything he wants to do. I can tell you for sure that his parents and grandparents cringe and hold their breath every time he slides into second base or home plate, but our worry doesn’t prevent him from doing so. Apparently, Little League baseball players have a deep-seated, inherent need to slide into bases, even when there’s not the slightest chance that the fielders might try to throw them out. Tyler would rather play baseball than eat ice cream and that’s a good thing because an ice cream cone could kill him.

Tyler would also be the first person to tell you that we don’t participate in the Step Out Walk hoping for some imminent miracle that would enable him to live without an insulin pump and such a severely restricted diet. And even though we don’t totally rule out that remote possibility of a miracle cure, our focus is on kids, like TKO, who are not yet born and we firmly believe that that the American Diabetes Association will eventually provide medical science with the financial resources to fund the research and development to make that happen.

By helping sponsor Team TKO in the Step Out Walk you can join our battle, or we’d love to have you join us at Keeneland a couple hours after the sun comes up on May 30.

If you would like to help sponsor us this year, the easiest way is to go online to stepout.diabetes.org and click on “donate” at the top of the page, then click on donate to or through a team or person, type in Ike Adams and that will take you to Team TKO’s page. I will try to update our progress on a daily basis.

If you would rather make a paper contribution, simply mail a check made payable to American Diabetes Association, with Team TKO on the memo line. Send it to my home address and Tyler and I will turn it in on Step Out Day.