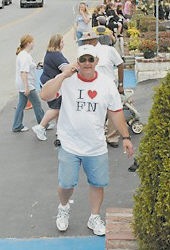 Tim Hall, right, was photographed while using a cellphone on September 7 during the opening hours of the Neon Days Festival. He died later in the day after performing onstage with the Soggier Bottom Boys.

The annual Neon Days Festival was canceled on the same day it opened last week after the unexpected death of a festival volunteer.

Timothy Wayne Hall, 50, of Neon, died early Friday night after performing in concert on a Main Street stage with the Soggier Bottom Boys, a novelty act he co-founded. The group’s performances have been considered one of the highlights of the festival for the past several years.

Hall, the husband of Fleming- Neon City Council Member Karen volunteer who was marking his 10th year as a volunteer member of the Neon Days Festival Committee.

“His passion was just having something for the people … for the kids,” said fellow committee member Darrell Wright. “He gave so selflessly of his time.”

Hall was an assistant pastor at worked as a coal miner and sign painter. He was known to many Fleming-Neon citizens for his years of service with the Neon Area Jaycees, and for his work in designing and painting the “Memorial Wall,” which graces the side of Fleming-Neon City Hall.

“(His) level of involvement was incredible,” Wright said, adding that Hall also worked tirelessly to raise money to buy Christmas lights for the town’s walking path. “The loss is just overwhelming.”

The theme of this year’s Neon Days Festival was “I Love F-N.” Wright said it would be difficult to find anyone who thought more of the town than Hall did.

“Everything about Fleming- Neon was his passion,” said Wright, who was a friend to Hall for 30 years. “He wanted it to be better.”

Funeral services for Hall were held Monday at the Deane Baptist Church. Burial was in Green Acres Cemetery at Ermine.

Letcher Funeral Home owner Robbie Campbell said he can’t remember a death which drew more mourners to the chapel of his funeral home in downtown Whitesburg.

“It was one of the largest crowds for visitation we’ve ever had,” said Campbell. “They were backed up to the courthouse until 10 o’clock last night (Sunday) waiting to pay their respects. Between the visitation and funeral, there were over a thousand people.”

Hall was the son of Bruce and Geraldine Sparks Hall of Deane.

A photo tribute to Hall appears on Page 2.