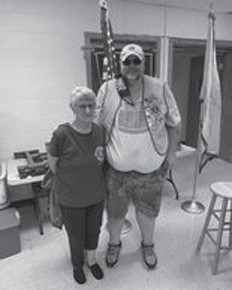 On Tuesday, April 7, the Neon Lions Club met for the first time since February 18, 2020, due to the COVID-19 situation in the U.S. and around the world. It has been a long and trying time for the world as we knew it before the outbreak. During this time the Lions Club committee met several times to further the work of the club.

The club met for its first meeting of the year of 2021 on April 7, and there were 12 members present. Dinner was not served as usual, although refreshments were available. The meeting began as always with the pledge to the flag and a prayer and a reading of the minutes of our last meeting, followed by our discussion.

The topics of our discussion included future projects, and the setting of the flagpoles at the Fleming- Neon School by the Lions Club, along with the help of State Representative Angie Hatton, Letcher County Clerk Mike Watts, and former resident Ray Howard. Two poles were set, one on each side of the existing pole which was placed there around 30 years ago. The club members and others set the poles we now have a state flag and an American flag on the two newly erected poles.

After the recent flooding of the town of Neon, the Neon Volunteer Fire Department worked for several days to clean up the town and area. During the cleanup, the Lions Club provided a dinner for the fire department crew.

Lion Phillip Adams gave an update that four applications have been presented to the club for eyeglasses and that our association with MCHC, which provides the service, is running smoothly. Lion Phillip also stated that a collection box for old glasses is now located at the Farm Bureau Insurance Company in Whitesburg. He also stated that the general public has donated a huge amount of glasses to the program.

Also, a motion was made and carried to once again give an annual donation to the Neon Little League.

Lion Secretary Mark Wagoner announced he would be having surgery the next week on an adrenal gland tumor. He stated that the doctor said it was non-cancerous, however the surgery is serious and we wish him the best. The surgery has already happened and it was a success and he is now recuperating at home. God has once again blessed one of his children.

All in all, it was good to be back together with our group as we wish everyone to be blessed during this year of our Lord. The meeting was adjourned.

During this past week, the club met once again on Tuesday evening, April 20, and 10 members were present. As of yet no dinner was served, however, thanks to the women of the Neon Church of God, who once again served us with refreshments of cola, coffee, cake and fruit.

After the opening of the meeting as always with pledge and prayer, Lion Treasurer Terry Sturgill presented the financial report, and Lion Sam Quillen read aloud a thank you card the club received from Neon Grade School Principal Robinson in regard to the flag poles and work done by the Lions Club.

A discussion took place regarding the status of festivals for this year. At this point I understand that Jenkins will have a short two-day festival this year, and as for the rest of the county, I have no information at this time.

The Neon Lions Club has 21 active members at this time and a discussion of updating the information file of members, as Lion Sam will update the contact booklets to be passed out during the next meeting. At this point the meeting was adjourned.

And as always, “We Are The Neon Lions Club, And We Serve”