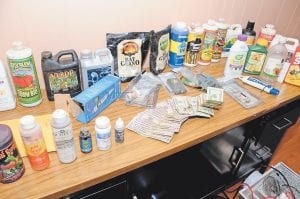 Blake Adam Johnson, of Goose Creek Road, is charged with cultivation of marijuana (more than five plants), trafficking in marijuana (less than eight ounces) and use/possession of drug paraphernalia.

Jenkins police were notified earlier on March 6 that Johnson allegedly shoplifted in the Jenkins Rite Aid. Johnson admitted to police that he stole powdered baby formula, according to a citation. In Johnson’s pants pocket police found Neurontin in a prescription bottle labeled to contain Suboxone, according to the citation. 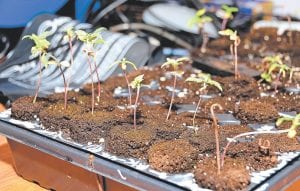 Neon police recovered sprouts of marijuana, products to help it grow, and $1,300 in cash during a search of a home recently. (Photos by Chris Anderson)

Johnson is charged with theft by unlawful taking, illegal possession of legend drug and controlled substance prescription not in original container.

He is in the Letcher County Jail.