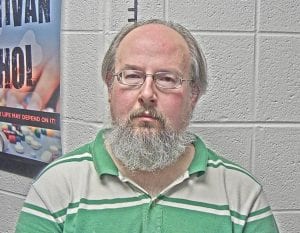 Nathan Jarrod Stidham, 39, of 3166 Hwy 805, was arrested Jan. 14 after garbage collectors picked up his garbage and a bag ripped, allegedly spilling about 100 printed pornographic images of girls police estimated to be between 8 and 12 years old. The Letcher County Sanitation Department notified police, who picked up the printed images, which appeared to be printed on standard computer paper. Troopers then went to Stidham’s trailer in the Wright Trailer Court and asked to speak with him.

Once inside, Trooper Anthony Trotter, wrote in a citation that he smelled marijuana and asked for permission to look in his room. He wrote that Stidham said there was no marijuana in the house and agreed for him to look. Trotter said he opened a black filing cabinet and found hundreds of more images printed on similar paper.

Trotter wrote in the citation that Stidham said he potentially had thousands of images of child pornography, including printed, on portable computer drives, his computer and other items. Troopers called for additional help searching the room and found evidence of “a minimum of a thousand images.”

Trotter wrote that those images were in fire safe boxes, filing cabinets and dresser drawers. Most had been placed in plastic sleeves and stored in hardbacked three-ring binders. Some were categorized by age and ethnicity, according to the citation, and included “graphic images of young girls approximately 2 years of age.”

Troopers arrested Stidham and took him to the Letcher County Jail, where he is still being held.

The case is still under investigation by Trooper Trotter.