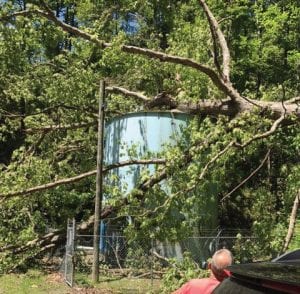 Water service to customers on the Fleming-Neon water system may have to be disrupted after this tree is removed from the system’s main storage tank.

Fleming-Neon water customers in the McRoberts and Fleming areas will be without water for at least one day in the near future.

Water Manager Chris Banks told the council that a large tree fell from an embankment and landed on top of the city water tank at Tom Biggs. He said that when the clean up is complete, the tank will have to be drained and inspected. Banks said it is possible that the tank is undamaged and he hopes that is the case. He added that a coal company sent crews yesterday to begin removing the tree, and there is an excavator coming down a logging road to finish removing the tree.

Banks told the council that he has contacted the state Division of Water and that when the tree is completely removed, an inspector will come to examine the tank to make sure it is safe. He added that he plans to drain the tank and have it ready when the inspector gets here so it will be off- line for as short a time as possible. Banks and Mayor Susie Polis said the city will take every possible step to notify the people who will be affected and let them know when the tank will be drained. The city will make every effort to provide water by other means until the tank can be filled again and service will return to normal.

In other business, the council welcomed new member Joe King, who was appointed last month to fill the vacancy created by the death of Jeff Breeding. Mayor Polis also informed the council that Cheryl Furby has resigned. Furby was ap pointed to fill a vacancy that was left when Trey Quillen did not seek re-election. Polis said she will appoint someone to fill the position within the time frame specified by state law.

The council also voted unanimously to approve Police Chief Mike Dingus’s request to apply for a grant through the U.S. Department of Homeland Security for new body armor for city officers. The grant would come through the Law Enforcement Protection Program, which is funded by the sale of confiscated firearms by the Kentucky State Police, and provides grant funding for Kentucky law enforcement agencies throughout the state.

Mayor Polis announced that a tire amnesty will be in effect this week, June 15, 16, and 17. She said the city will pick up tires on Friday between 8 a.m. and 4:30 p.m. for sanitation customers if they call City Hall and let it be known that they will be setting tires out for pick-up. Tires can be also be dropped off at the old Swanee Tipple site at Isom.

Council member Linda Cantrell asked if there will be a July 4 fireworks display this year. Councilman James D. Collins said the Neon Days committee will not be able to afford one and Mayor Polis said that although the city usually pays for part of the annual show, it will not be able to pay for an entire show either.