Neon water said to be safe 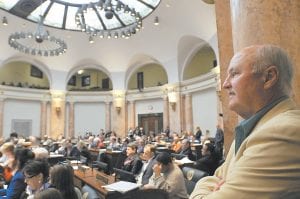 LESS THAN TEN DAYS TO GO — Sen. Johnny Ray Turner, D-Prestonsburg, observed proceedings in the Kentucky House of Representatives. Turner, whose district includes Letcher County, and his fellow state senators and representatives will be in Frankfort for only nine more days before the current session of the Kentucky General Assembly ends. (Photo courtesy Legislative Research Commission)

Water supplied by the Neon Water Company is safe to drink despite a letter about faulty equipment that was mailed recently to water customers in the Fleming-Neon area.

The Fleming-Neon City Council was told at its March meeting this week that the letter was mailed to customers for the sole purpose of complying with a state request to correct a notice that had been included with water bills late in 2014. Water company manager Chris Banks told the council the water is perfectly safe to drink and the letter was sent in regard to a notice which had been originally printed on the back of the city’s water bills. The Kentucky Department of Water had informed the city that the letter informing customers of the problem had to be sent separately, and the current letter was mailed.

The original problem in 2014 had been corrected in a few hours, Banks told the council. In response to a question from the a council member, Banks said he wanted to be certain that city water customers know their water supply is safe. He also reported that the city’s loss of treated water for February stood at 39 percent.

In a related matter, Neon Water Company customers will be asked to participate in a survey for a Community Development Block Grant that will allow for the first phase of rebuilding the city’s water and sewer system. Angela Smith Hall, community resources planner with the Kentucky River Area Development District, said the survey will start April 1 and that KRADD hopes the people who administer the survey will be able to get as many as possible done when customers come in to Fleming-Neon City Hall to pay their bills. Then, if it is necessary, the survey takers will go door to door, she said.

In other business, Mayor Susan Polis also called the council’s attention to the newly cleared lot where the old Lillian Webb Library once stood. The city and the Letcher County Library Board had originally agreed to exchange the lot for the one where the old Hazen building stood. The agreement called for the exchange of one clean lot for another. The city demolished the Hazen building and presented the lot to the library board, but the library board did not take steps to demolish the old library, which later burned.

After a long and contentious period of wrangling, the city was presented with a check for the amount of money estimated to clean the lot by City Attorney Jimmy Craft at last month’s meeting. Polis praised the work and said she is certain that people who drive by the lot and those who live nearby are very happy that it has finally been cleaned. She also said the cost for the cleanup had slightly exceeded the amount of the check, adding that she will discuss the matter with library board officials.

“We have to be glad the eyesore is gone,” said Polis. “It’s a lesson learned on my part, well, on our part.”

In response to a question from Councilman Tom Haynes regarding the amount of funds the city has for Parks and Recreation, Councilman James D. Collins said he will attend next Monday’s meeting of the Letcher County Fiscal Court and find out what of any funds remain for Parks and Recreation in light of the county’s budget crisis. Haynes said he thinks there should be something left from funds that were allocated for work done on the Tim Hall Stage last fall and reminded the council members that they had agreed to purchase benches for the park and stage area if they have the funding.

Councilman Collins also asked council members if they want to hold the annual PRIDE Clean-up Day this year. Collins said nobody showed up on the day it was scheduled last year and added that PRIDE does not have the funding to help the city conduct the project. The council decided to set the clean-up date for April 16 with April 23 as the alternative day in case of rain. Collins said the event will begin at 9 a.m.

Collins asked Polis if the city will be able to haul “big stuff ” to the transfer station. Polis said it can, but not throughout the entire month. She said she will discuss the matter with City Foreman Jake Johnson to determine how often the sanitation department can take large items to the dump.