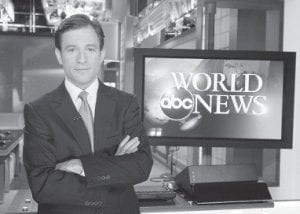 Williams’ “BriTunes” — a name he quickly found was already in use by a 27-year-old blogger — launched last week with the NBC News chief anchor’s talk with Deer Tick. That’s the indie rock buzz band from Providence, R.I., not the arachnid whose bite can carry Lyme Disease.

ABC News’ Harris has for the past few months operated “Amplified,” a Web site that features his interviews with such artists as Superdrag, Neko Case, Amadou and Mariam, the Virgins and Bon Iver.

They appear to be passion plays, rather than calculated attempts at reaching younger audiences.

For anyone whose vision of a network anchor runs to Tom Brokaw or Walter Cronkite stateliness, the sight of Williams on camera comparing the styles of White Lies and Interpol is jarring. His current playlist includes Great Lakes Swimmers, Dead Weather, the Knux and Jason Isbell (who will be performing again in Whitesburg on July 11).

“Since my earliest memory, I’ve never been able to drive without music, write without music or be alone for too long without a song playing. This, I guess, is an extension of that,” said Williams, whose plans this past weekend included taking in Green Day and Leonard Cohen concerts.

Harris was hooked when the goth kid in his high school class handed him a tape of the Minutemen and Sonic Youth.

Harris, 37, anchors ABC’s “World News” on Sundays and is a general assignment reporter who spent six months in Iraq. He has a “Nightline” piece coming this week on children in the Congo being accused of witchcraft and subjected to abusive exorcisms. Williams, who turned 50 last month, is a news traditionalist with such a formal manner on “Nightly News” that his bosses once worried that viewers would have a hard time relating to him.

Their musical credentials were met with some suspicion in the rock world. “There is sort of a feeling of ‘What are these interlopers doing in our special little space?'” Harris said.

Harris makes clear to the bands he interviews that he’s a fan. He interviews like he’s one part journalist and one part guy who won a radio contest to hang out backstage.

When he met hero Bob Mould, “I was sort of geeked-out and excited and I think he found that charming,” Harris said.

“Given the amount of time I have in my life, there’s no way that I’d do a band that I have mixed feelings about.”

Luckily for Harris, the head of ABC News’ digital operation is another music junkie with whom he often trades CDs. Although he’s strictly indie rock now, the name “Amplified” was chosen to allow room for expansion, perhaps into film and television. Harris, who is getting married in a few weeks, will have to see how long he can keep up the pace this is on his own time.

Williams’ musical tastes are a little broader. As a volunteer firefighter in New Jersey years ago, he joined his buddies on weekends to chase bar bands along the Jersey shore.

“They will quickly straighten me out if they detect any signs that I’m becoming a tragic hipster,” he said.

It’s hard to even gin up a rivalry between the two anchors, not when they both recommend the same little-known Scottish band Camera Obscura (a demerit to Williams for spelling it wrong on BriTunes).

But Harris couldn’t resist poking fun at what Williams wore during the Deer Tick interview. “The V-neck sweater works,” Harris wrote on his blog. “Love it.”

“I suppose if Coppola were writing this script, we’d have to consider a ‘summit’ meeting of the heads of the major online music families at a New York restaurant, so we respect each other’s turf,” Williams said. “As Hyman Roth (a gangster in ‘The Godfather Part II’) said, ‘This is the business we’ve chosen.'”