New advice on peanut allergies in infants explained by experts 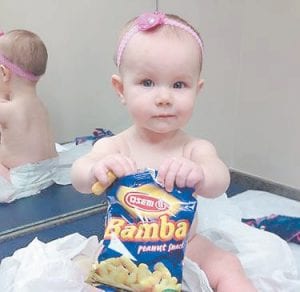 In this photo provided by the Carrie Stevenson, her daughter Estelle holds a bag of peanut snacks in her pediatrician’s office at age nine-months, in Columbus, Ohio. Most babies should start eating peanut containing foods well before their first birthday, say new guidelines released that aim to protect high-risk tots and other youngsters, too, from developing the dangerous food allergy. (Carrie Stevenson via AP)

The National Institutes of Health has issued new guidelines saying most babies should regularly eat those foods starting around 6 months of age, some as early as 4 months. It’s a major shift in dietary advice for a country fearful of one of the most dangerous food allergies.

“We’re on the cusp of hopefully being able to prevent a large number of cases of peanut allergy,” said Dr. Matthew Greenhawt of the American College of Allergy, Asthma and Immunology, a member of the NIH-appointed panel that wrote the guidelines.

The recommendations are based on landmark research that found early exposure is far more likely to protect babies from developing peanut allergies than to harm them. The guidelines spell out exactly how to introduce infants to age appropriate peanut products depending on whether they’re at high, moderate or low risk of becoming allergic as they grow.

Babies at high risk — because they have a severe form of the skin rash eczema or egg allergies — need a check-up before any peanut exposure, and might get their first taste in the doctor’s office.

For other tots, most parents can start adding peanut-containing foods to the diet much like they already introduced oatmeal or mushed peas.

No, babies don’t get whole peanuts or a big glob of peanut butter — those are choking hazards. Instead, the guidelines include options like watered-down peanut butter or easy-togum peanut-flavored “puff” snacks.

“It’s an important step forward,” said Dr. Anthony Fauci, director of NIH’s National Institute of Allergy and Infectious Diseases, which appointed experts to turn the research findings into user-friendly guidelines. “When you do desensitize them from an early age, you have a very positive effect.”

Peanut allergy is a growing problem, affecting about 2 percent of U.S. children who must avoid the wide array of peanut-containing foods or risk severe, even life-threatening, reactions.

For years, pediatricians advised avoiding peanuts until age 3 for children thought to be at risk. But the delay didn’t help, and that recommendation was dropped in 2008, although parent wariness of peanuts persists.

“ Just because your uncle, aunt and sibling have an allergy, that’s even more reason to give your baby the food now,” even if they’re already older than 6 months, added Sicherer, a pediatric allergist at Mount Sinai Hospital in New York.

In Columbus, Ohio, one doctor told Carrie Stevenson to avoid peanuts after her daughter was diagnosed with egg allergy. Then Stevenson found an allergy specialist who insisted that was the wrong advice — and offered baby Estelle a taste test of peanut butter in his office when she was 7 months old.

“I was really nervous,” Stevenson recalled, unsure which doctor to believe. But “we didn’t want her to have any more allergies.”

Now 18 months old, Estelle has eaten peanut butter or peanut-flavored puffs at least three times a week since then and so far seems healthy. Stevenson, pregnant again, plans early exposure for her next child, too .

— All babies should try other solid foods before peanut-containing ones, to be sure they’re developmentally ready.

— High- risk babies should have peanut-containing foods introduced at age 4 to 6 months after a check-up to tell if they should have the first taste in the doctor’s office, or if it’s OK to try at home with a parent watching for any reactions.

— Moderate-risk babies have milder eczema, typically treated with over the counter creams. They should start peanut-based foods around 6 months, at home.

— Most babies are low risk, and parents can introduce peanut-based foods along with other solids, usually around 6 months.

What’s the evidence? First, researchers noticed a tenfold higher rate of peanut allergy among Jewish children in Britain, who aren’t fed peanut products during infancy, compared to those in Israel where peanut-based foods are common starting around age 7 months.

What if an older sibling or someone else in the home already is allergic to peanuts? The new baby needs a chance at prevention so talk to your doctor about how to do so while keeping the allergic family member safe, with extra care in washing hands and keeping food separate, said Greenhawt, an allergy specialist at Children’s Hospital Colorado.

Whether the dietary change really will cut U.S. peanut allergies depends on how many parents heed the new advice, and the guidelines urge doctors to follow up, even offer lower risk tots an in-office taste, to reassure them.

“We would encourage everybody to get on board with this,” Greenhawt said.