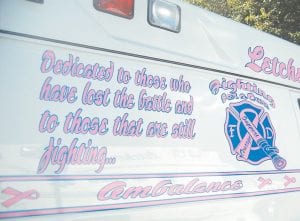 PRETTY IN PINK — One of three new ambulances bought by Letcher Volunteer Fire and Rescue will be used exclusively to transport cancer patients to receive chemotherapy and radiation treatments. A decal on the side of the vehicle says, “Dedicated to those who have lost the battle and to those that are still fighting.”

Letcher Volunteer Fire and Rescue bought three new ambulances recently, including a pink one which is dedicated to transporting cancer patients to receive chemotherapy and radiation treatments.

The ambulance has pink ribbon decals placed on the sides of the vehicle as well as a decal of a fire hose made to look like a pink ribbon. “Dedicated to those who have lost the battle and to those that are still fighting” can be seen on either side of the ambulance.

Brenda Caudill, whose husband works for the department, is a cancer survivor and suggested the idea of coloring an ambulance pink. On the front of the ambulance is a decal that says “Shorty’s Toy,” which is in honor of Caudill.

Those who ride in the pink ambulance will wear pink shirts with the fire department’s logo printed on the shirts.

Rogers thinks that there is only one other pink ambulance in Kentucky and it is located in Laurel County.

“We are showing the community that we do care about the families who are dealing with cancer,” said Gary Rogers, chief of Letcher Volunteer Fire and Rescue.

The ambulance service transports five to 10 patients a week to Hazard and Lexington for chemotherapy and radiation treatments. Sometimes the department will take patients to treatments in Hazard for 45 days in a row.

Rogers said of the 16 paid employees who go on ambulance runs, at least eight have someone in their families who are dealing with cancer or have lost someone to cancer.

“There aren’t too many families that cancer hasn’t affected,” said Letcher County Coroner Wallace ‘Spanky’ Bolling Jr., who is a firefighter and emergency medical technician.

Bolling said the employees help cancer patients in ways that the general public may never see. The department buys Christmas presents and Thanksgiving dinners for its patients.

“The majority of our money comes from dialysis and cancer patients and we put it back in for them,” said Rogers. “We take care of every patient just like they are our families. Whatever they need we try to see that it is done.”

Rogers said one of his favorite memories is when he and other employees took a bedfast woman to Whitesburg Walmart after regular business hours to buy Christmas gifts for her children a few years ago. A few months later the woman died.

“She wanted to go shopping herself,” said Rogers. “We let her do what she wanted to do. That’s something we liked more than anything else we ever did. It turned out to be good.”

“We do a lot more than people think,” said Rogers.

Rogers said he would like to see the department donate a percentage of each transport made in the pink ambulance to the Letcher County Relay for Life.

The new ambulances, which cost $65,000 each, were delivered Sept. 3 and the pink ambulance made its public debut in the Isom Days Parade on Sept. 4. The ambulance will be driven in the Mountain Heritage Festival Parade on Sept. 25.