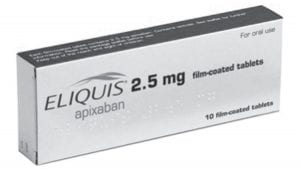 Eliquis, developed by Bristol-Myers Squibb Co. and Pfizer Inc. and approved by the FDA, is a potential blockbuster in a new category of medicines to prevent strokes.

The Food and Drug Administration has approved an anticlotting drug called Eliquis, developed by Bristol Myers Squibb Co. and Pfizer Inc. It’s a potential blockbuster in a new category of medicines to prevent strokes.

On December 28, the FDA cleared the pill for treating the most common type of irregular heartbeat, atrial fibrillation, in patients at risk for strokes or dangerous clots.

About a quarter of all people aged 40 and older develop atrial fibrillation, a condition in which the heart’s two upper chambers contract irregularly and don’t pump blood efficiently. This can persist for years or only happen occasionally, and increases the risk of a stroke fivefold.

For decades atrial fibrillation patients were treated with the blood thinner warfarin, sold under brands that included Coumadin. While warfarin is cheap, users must get frequent blood tests to ensure they’re getting enough to prevent strokes but not too high a dose, which can cause dangerous internal bleeding.

In the last two years drug regulators in the U.S. and other countries have approved two other new anticlotting drugs for patients with atrial fibrillation:

Some analysts have said Eliquis, known chemically as apixaban, is the best of the three new drugs, but Pradaxa and Xarelto got a big head start in building U. S. market share. That means that Pfizer and Bristol-Myers could have a tough job persuading doctors and patients who already have switched from warfarin to Pradaxa or Xarelto to again switch medication.

Eliquis is manufactured by Bristol-Myers Squibb and co- marketed with Pfizer. Both companies are based in New York.

The FDA said it approved the drug based on an 18,000-patient study conducted by the drugmakers. The trial showed that patients taking Eliquis had fewer strokes than those taking warfarin.

The agency warned that patients with artificial heart valves should not take the drug because it was not studied in that population.