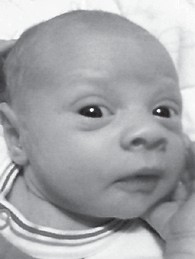 — James Robert Sexton was born December 31 at Whitesburg Appalachian Regional Hospital to Mark and Katherine Sexton of Whitesburg. He has two brothers, Joseph, 7, and Aaron, 5. He is the grandson of Vertie Sturgill of Kingscreek and the late James Andy Sturgill, and the late Robert and Wanda Sexton of Whitesburg. His great-grandmother is Easter Huff of Neon. He is named after his two grandfathers who died in 2012.