New bakery went through 1,000 cupcakes on the day it opened 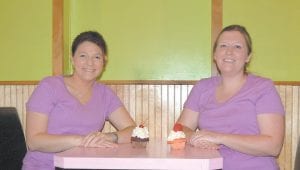 Icing on the Cake owners Becky Pigman and Kendra McIntosh posed for a photo in downtown Whitesburg.

Cousins Becky Pigman and Kendra McIntosh were surprised to sell 1,000 gourmet cupcakes in five hours Monday during the grand opening of their bakery on Main Street in Whitesburg.

In honor of National Cupcake Day on Monday, cupcakes, regularly priced at $2.25 each, were $1 apiece at Icing on the Cake, located in the Quillen Drugstore building which most recently housed Hillbillies BBQ. Most customers bought six or more.

In addition to selling 1,000 cupcakes to customers walking into the, 200 were preordered by telephone. Pigman, of Redfox in Knott County, said the combination of the anticipation of a new bakery and $1 cupcakes resulted in the shop selling out of cupcakes and closing early around 11:30 a.m.

To prepare for the bakery’s opening day, McIntosh and Pigman began baking cupcakes around 4 p.m. on Sunday. They left the bakery at 2 a.m. Monday and returned by 6 a.m. Pigman’s mother, Judy Pigman, helped the duo get ready for their first week of business in the Whitesburg location. 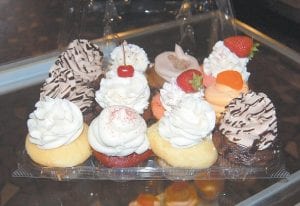 An assortment of cupcakes was on display earlier this week.

Pigman and McIntosh, of Whitesburg, baked and iced 350 cupcakes for the second day of business. By 10 a.m. on Tuesday, one of the owners posted on the social media site Facebook that they expected to sell out of cupcakes again before the close of business.

Pigman said she and McIntosh are overwhelmed by the community’s support and generosity.

In October 2013, Pigman opened Icing on the Cake in Dorton. As the only paid employee, she kept busy making cupcakes, specialty cakes, fruit bouquets and other desserts. She decorated cakes for customers from Virginia, West Virginia and eight different counties in Kentucky.

“It was really successful,” said Pigman.

About a month ago Pigman and McIntosh decided to move Pigman’s Pike County location to downtown Whitesburg. McIntosh is now co-owner of the business.

Pigman said Icing on the Cake will eventually sell a variety of items such as breads, gourmet apples, cream horns, pies, candies, cookies and chocolate-covered strawberries.

Starting today (Wednesday), doughnuts will be added to the bakery’s selection. Glazed doughnuts and doughnut holes will be available for sale every day. Selection will vary with other items including apple fritters, Bavarian cream doughnuts and cake doughnuts.

Pigman said cupcake flavors, doughnut varieties and other items will be posted each day on the bakery’s Facebook page at www.facebook.com/kyicingonthecake.

“Please bear with us as we are working out the kinks to make the business fit the needs and wants of our customers,” said Pigman.