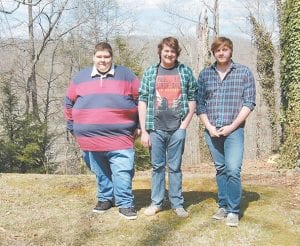 Two Letcher County brothers and a friend sing lyrics about faith and lessons learned from family in their debut album.

“It kind of documents the way a family faces situations,” said Kenny Miles, front man and primary songwriter of the band Wayne Graham. “We all face it together. We put God first and it makes that situation easier to get through.”

Kenny Miles, 20, and his 15-year-old brother, Hayden, of Mayking, co-wrote many of the 13 tracks on “Ripe Old Age”, which should be available for purchase at Hometown Music, The Way Christian bookstore, and on iTunes by the end of March.

The trio categorizes its music as folk/rock.

Several family ties can be found in Wayne Graham including the band name, which is in honor of Kenny and Hayden’s grandparents. The song, “Evelyn”, is named after their grandmother. “Evelyn’s Prayer” records a weekly ritual that has meaning to the brothers.

“Every Sunday we go and eat dinner at my grandma’s house,” said Kenny Miles. “It’s something that is important for me to hear each week.”

Kenny Miles attended recording school after he graduated from LCCHS and then tried community college for a semester.

“I want to play music my whole life,” said Kenny Miles. “I tried other things but I can’t focus on that. I can’t take my mind off of music long enough to give it a chance.”

Their parents, Kim and Ken Miles, built a recording studio in the basement of their home where “Ripe Old Age” was recorded. The brothers have dubbed the studio Fat Baby Studios.

“I’m just lucky to be along for the ride,” said West.

“It’s mostly stories about making it through tough situations,” said Kenny Miles. “They aren’t all necessarily true stories. Really, in all of them they end on a good note.”